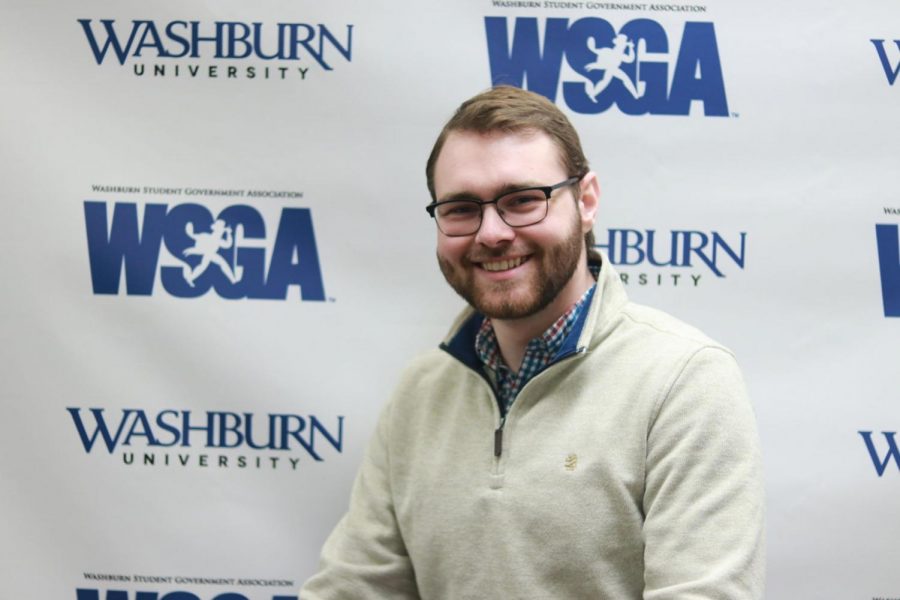 Hands over chair: Zac Surritt is the current president of Washburn Student Government Association. He became a senator again.

In February and March 2019, WSGA have been taking votes for the upcoming senators. The result was announced at the Spring Break Kickoff Event Friday, March 8.

Two new senators have been presented to WSGA, Kimberly Korber and Devin Lampen. Tonyce Jackson is a write-in candidate that got enough votes to become a senator on a write-in campaign. Seventeen members of WSGA were elected for senator positions.

The feature of the new senators is based on the votes of only Washburn University students. Washburn Law, Washburn Tech and faculty and staff don’t vote.

Jim Henry is the Vice-President of WSGA thinks WSGA offers many helpful skills for students’ futures.

“I think the biggest benefit really is just building on leadership skills,” said Henry. “Other than that, networking is the biggest thing I’ve seen people gain from being a senator and being a part of WSGA in general.”

There is a two-round voting. First, it goes to the Nomination Committee, which is comprised by a handful of senators and less than a handful of executive staff members that then vote on whether to give their bills favorable status or gaining a seat. Once that piece of legislation has favorable status, then the entire senate will vote.

The senators don’t have to be a specific year at Washburn University to be elected and they can also be a graduate student. There are five designated seats for freshmen in the fall semesters. Currently, there is only one specific seat for international students. A person can be the senator as long as he or she is admitted to Washburn University.

The motto of WSGA is “students serving students,” and their goal is to give back to other Washburn students.

“In general, just having a passion for wanting to make a difference and give back to campus,” said Henry. “I think a lot of people take that [WSGA motto] hard when they come into WSGA.”

Michael Guerrero, who is the current administrative assistant and technology director, will be the new president of WSGA.

Zac Surritt is the current president of WSGA.

“The elections are meant to be a time for students whether they are involved in WSGA or not to speak up about what they want to see on campus,” said Surritt. “The more students that run, the more competitive it gets, and then we really start to generate some ideas.”

The new WSGA senators are more than just Washburn students. They are students that help other students make a difference in their life and help them become more involved with Washburn.