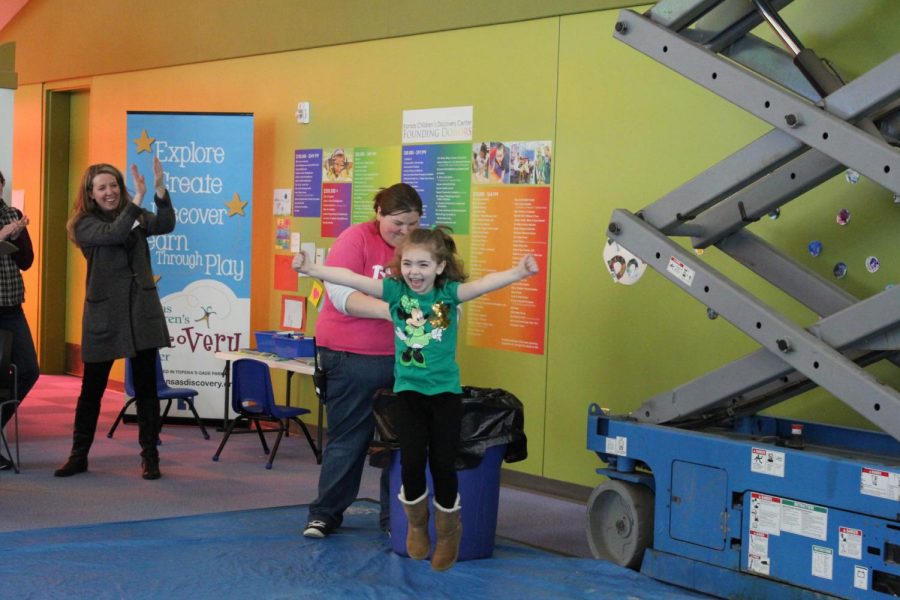 Jumping for joy: A girl jumps in excitement after hearing that her structure held up when dropped from the 20-foot high lift. The egg drop was the main event at the Engineering Expo this year.

All five of the human senses were in full use during the Engineering Expo at the Kansas Children’s Discovery Center that produced over 200 visitors Saturday, March 2.

Bright smiles, young lives and enlightened parents were in surplus. The expo highlights the common skills of engineers such as building, innovating and collaborating.

A model airplane suspended itself among the young creative minds as they constructed their cotton-ball-stuffed contraptions in hopes they would secure their egg that would descend from the building’s ceiling to the ground.

A slight right and now the airplane maneuvers above balloon structured towers that a young girl builds with her mom.

“Be careful, it’s going to fall,” the young girl said.

“I’ve got the tires,” said a young boy; another lays down onto a “mechanics creeper” and gets underneath the back end of the car. “I am fixing the front,” a young girl said to the others.

In a connected side room families build towers using KEVA blocks in hopes to eclipse the 11.25 feet record.

“It’s going to fall on top of me dad,” said a young boy at the top of a ladder. “It is a bit wobbly, isn’t it?” the father replied while circling the lower half of the structure to find a way to reinforce the bottom.

“Beep, beep, beep. I think our batteries are low.”

The airplane turns around sharply and makes a landing on the makeshift runway configured onto a tabletop.

3…2…1, and another cotton-ball-stuffed contraption is released from the top of the lift. Gravity takes it course and the crowd exhales.

“I don’t think this one made it. Yeah, probably not,” a couple of the employees said as they approach the tape-covered styrofoam cup.

The tape is stripped and the cup is split open.

“Wow! You sure did secure this one,” said Caitlin Luttjohann, the director of STEAM education. “It’s ok. Great job! Your egg is fine.”

Claps erupt from the crowd.

“These kids are smart,” said a voice from the back row of the crowd. “Yeah, they really are. This is neat. I wish they did this kind of thing for us when we were kids,” said another.

The airplane’s propellers reach maximum speed and the aircraft rises higher and flies above the Painting Pavilion.

Sunny spring scenes are vividly spread across the colored Plexiglas panels. Many creations end with a large circle with every available colored mixed together as it’s squeegeed to the bottom of the pane.

The electric lift descends and the egg drop has concluded, all eggs have reached the ground, some still round, others split in half.

Families begin to file out through the front door and the decibel level slowly decreases with each young one tired from the days events.

“This is a family event since collaboration is such a big part of what we do,” said Luttjohann. “We allow them [young children] to build structures, just like an engineer would with materials that they are familiar with.”

Bartlett & West and Westar Energy sponsored the event and collaborated on some of the thoughts involved with the KEVA skyscraper tower challenge and balloon structure building.

“This is a community-based building and so is this park,” said Kansas Children’s Discovery Center President and CEO Dené Mosier. “Team building is essential… over in our grain and farming area you must have a minimum of six hands total for the process so you have 2-3 families in there together collaborating… that is very much by design.”

The Kansas Children Discovery Center has hosted visitors from all 50 U.S. states and over 20 different countries, all brought together to promote team building and collaborative skills.