Competitive spirit could lead Ramirez to next level 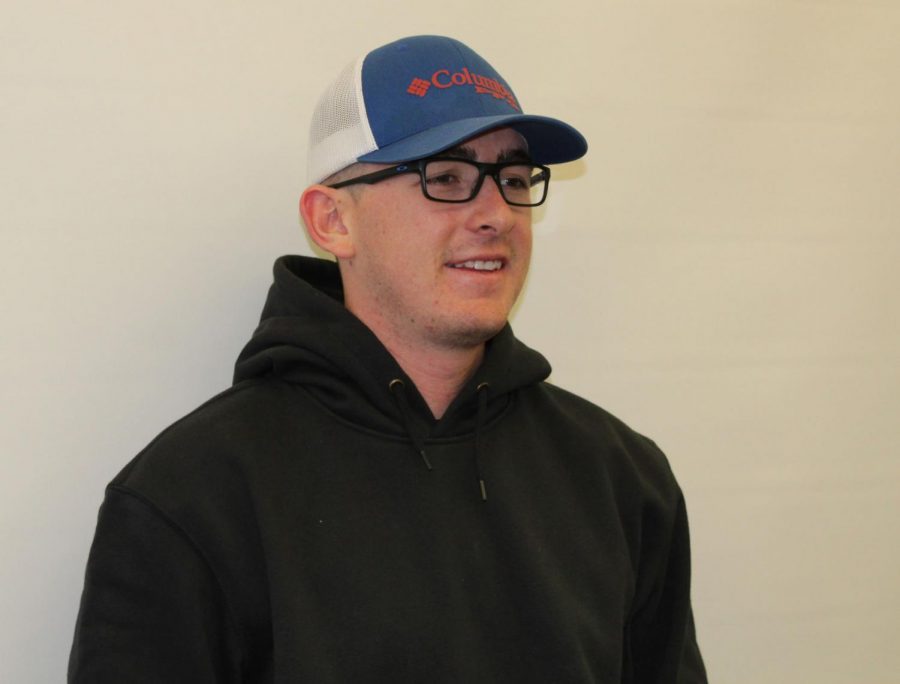 Picture of the pitcher: Josh Ramirez visits the Student Media office to have his picture taken. Ramirez became the Friday night starter this season.

Cold and inclement weather has delayed the start of the home schedule for the Washburn baseball team. Instead, they have spent the first month of the season on the road playing 15 games. They have won eight of those contests.

Leading the pitching staff this year and serving as the Friday night, front-line starter is senior Josh Ramirez.

Native of Lakewood, Colorado, he attended Green Mountain High School where he racked up a long list of accomplishments as a high school baseball player including winning back-to-back Colorado state championships in 2014 and 2015.

Ramirez is the son of Denise and Craig Ramirez. His mother works for the federal government as a systems analyst and his father also played college baseball, but he is now the general manager and part owner of a casino in Colorado. His brother, Matthew, attended Washburn last year before returning to Colorado this year.

Finding the ideal landing spot to play college baseball had its advantages for Ramirez because of the experiences his dad had playing in college. He had an inside track on his path to Washburn due to the fact that his dad played at Washburn with current Washburn Head Coach, Harvey Douglas.

“They [his father and coach Douglas] were really close and I got an opportunity from Douglas and basically I felt like it was the best fit for me,” said Ramirez.

Baseball is a game that requires many adjustments and Ramirez is driven by this aspect of the game which brings out his competitive spirit.

“I just love going out and competing every day,” said Ramirez. “You have to find a different way to pitch to every single guy. You don’t pitch some guys the way you would pitch to other guys. You have to learn to pitch instead of just going out there and throwing.”

Washburn has been everything Ramirez could ask for in its all around experience. Playing professional baseball after graduating this year is still his main goal if he is given that opportunity. If baseball doesn’t work out he plans to use his finance degree to go home and learn and eventually take over his father’s business.

During his time in school at Washburn he says the academics challenge him and it will eventually pay off in the real world.

Baseball consumes most of Ramirez’s time, but in the summer when he’s not perfecting his craft he likes to hit the links and play some golf. Golf has long been a favorite hobby among many baseball players so it’s only fitting that Ramirez also enjoys it.

With dreams and goals of playing professionally, Ramirez is constantly working to better himself. His teammates notice this hard work and it rubs off on everyone including fellow pitcher Nate Lorenzen.

“Josh is the epitome of a guy who leads by example,” said Lorenzen. “He doesn’t always vocalize himself, but as a pitcher who has a chance at the next level he is always busting his butt trying to get better.”

Ramirez got a feel for what professional baseball is like when he played up north in the Northwoods League this past summer. There he was playing every single day and was constantly on the road and traveling which is how professional life would be.

Despite not always saying much, Ramirez is still looked upon to help lead the team. Being the Friday night starter means that you are the ace of the pitching staff, so you are the one who pitches the first game of every weekend series and Ramirez is that guy for the Ichabods.

“He’s our Friday night guy for a reason,” said Lorenzen. “Day in and day out he wants to outwork the guy next to him. Teammates feed off of him because he has success with what he does, and people follow that.”

If the weather holds, Ramirez will likely be on the mound to kick off a weekend series against the Missouri Southern State Lions at 5 p.m. next Friday, March 8 in Joplin, Missouri. The Saturday and Sunday games will begin at 1 p.m.