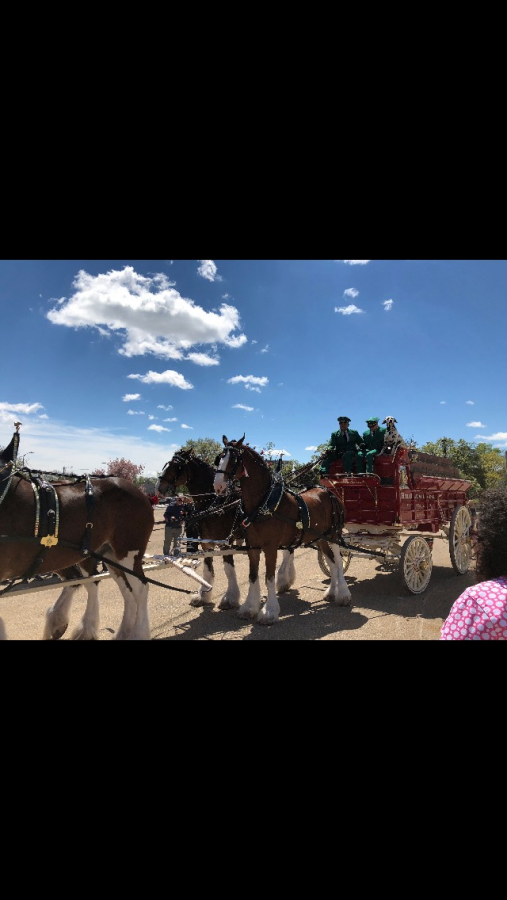 Topeka was visited by an entourage consisting of a horse-drawn carriage, two coachmen and a spotted Dalmatian Thursday, April 18. This group is known as the Budweiser Clydesdales. The party came to Topeka to celebrate the recent changes with beer laws in Kansas. These laws allow grocery stores to sell new varieties and stronger types of beers. These changes have been met with applause from Topeka residents.

The new changes will roll back a Prohibition rule that restricted certain stores in Kansas to only sell beer that was 3.2 percent or less alcohol content. Grocery and convenience stores will now be able to sell beer with an alcohol content of 6 percent. The new beer laws were officially approved to go into effect on April 1.

The horse-drawn carriage accompanied by eight large horses bearing the insignia of Budweiser rolled into Topeka. The horses that made up the coach’s team are a breed called Clydesdales, known for their large size, pulled the carriage with the Budweiser insignia in front of the capitol building as a crowd gathered to witness. Office employees and others from the local area surrounded the area eager to hear the news about the new changes to Kansas’ beer laws.

Simon Wuestenberg, vice-president of sales for Anheuser-Busch, was present to deliver a speech to the gathered crowd.

“This is a momentous milestone in the state’s beer history, and if there’s anybody that I want to thank it would be Speaker of the House Ron Ryckman for all the work that he has done,” Wuestenberg said.

Ron Ryckman helped make the change in Kansas beer laws a reality and was given an honorary plaque bearing a Clydesdale horseshoe for his efforts by officials representing Anheuser-Busch.

The Clydesdale horses bear great significance to the Anheuser-Busch company and its history. In 1933, August Busch Jr. and Adolphus Busch III surprised their father with a Clydesdale hitch to celebrate an important moment; that moment being the repeal of prohibition. They later sent a hitch to New York City, which drew a crowd of thousands, to continue the celebrations. This same hitch continued on to Washington D.C. where it delivered one of the first cases of Budweiser that was produced to President Franklin Roosevelt in 1933.

The hitch that made the incredible delivery to one of our most famous presidents in American history is the same one that visited Topeka last week. After the announcements were concluded at the capitol building, the hitch traveled on a short parade route through downtown Topeka where it stopped for the day at the Celtic Fox.