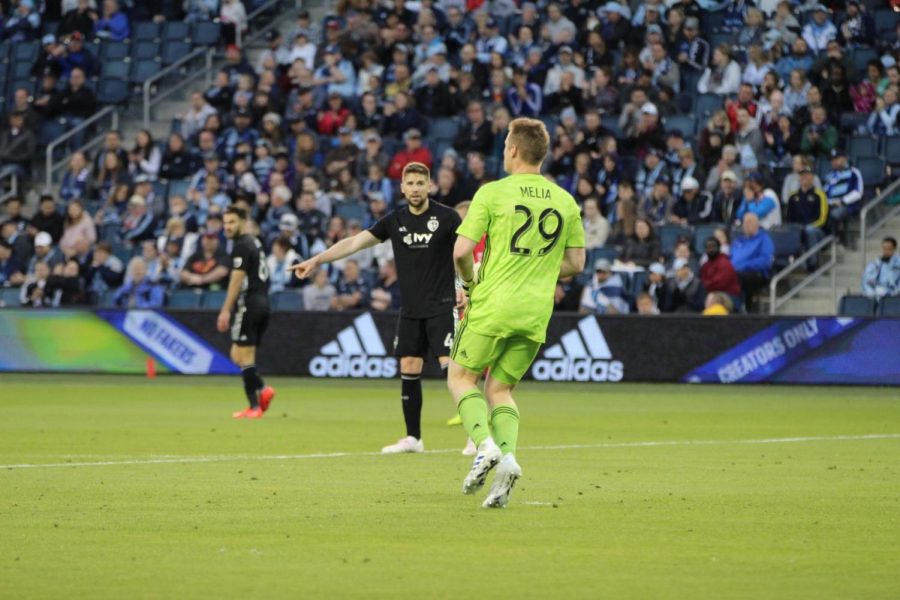 Play it: Defender Andreu Fontas requests the ball to places in front of him from goalkeeper Tim Melia. Sporting KC would fall on Saturday, 4-1, to the San Jose Earthquakes.

On Saturday, Sporting KC took on the San Jose Earthquakes in a Western Conference showdown. From the get-go, San Jose was the better team on Saturday. It only took the Earthquakes a few minutes to grab an early lead that they would never relinquish. Sporting KC would end their MLS unbeaten streak after a 4-1 loss to San Jose.

For San Jose forward, Danny Hoesen, Saturday was a good day. Before the fifteen-minute mark, Hoesen had single-handedly given the Earthquakes a 2-0 lead after scores in the sixth and twelfth-minute marks.

Sporting KC captain and defender, Matt Besler would exit the game on an injury in the 15th minute.

Sporting had a chance to get themselves back in the game a little while later, forward Gianluca Busio was awarded a penalty kick, but forward Krisztian Nemeth was unable to keep Sporting in the game as his kick went over the cross bar.

Then before halftime, San Jose added another goal to give themselves a resounding 3-0 to head into the half on.

That 3-0 lead only increased as the game went along as the Earthquakes added on another tally a little after 15 minutes into the second half.

In the 66’, Sporting finally made their mark on the scoreboard after a penalty kick from midfielder, Felipe Gutierrez found the back of the net to cut the San Jose lead to 4-1.

The dominating performance from San Jose would end in a 4-1 loss for Sporting KC.

For forward Gerso Fernandes, you have to start the game off better than giving up two goals within the first fifteen minutes of the game.

“We didn’t start the game very well. We suffered two goals in the first 10, 15 minutes and that was very hard for us because we had a plan for the game and with those two goals everything changed, and we had to chase the game. I think it just didn’t go our way tonight,” Fernandes said.

The match did produce multiple moments for Sporting to get back into the game, Sporting was just not able to execute in crucial moments. For midfielder Kelyn Rowe, that was what killed Sporting on Saturday.

“Go out and play. Got to make something happen. I think we created some chances actually, some good ones. Just got unlucky to finish. [Tim] Melia made some good saves and I think the missed penalty wasn’t what we wanted, but we got another one and put it away,” Rowe said.

As for next week’s match, Rowe believes that Sporting needs to get back to the way they were playing earlier in the year.

““We got to get back to our ways, to the Sporting way of keeping the ball and closing things down and making sure that teams just can’t break on us. In the past, they’ve been very good at making sure the ball stays in our attacking half and breaking up any kind of clearance they have, making it very tough for teams to get out and we need to get back to our ways in that sense and just be clinical and confident near the goal,” Rowe said.

The next match for Sporting will be on Saturday, April 27 at 7:30 p.m. at Children’s Mercy Park against the New England Revolution.