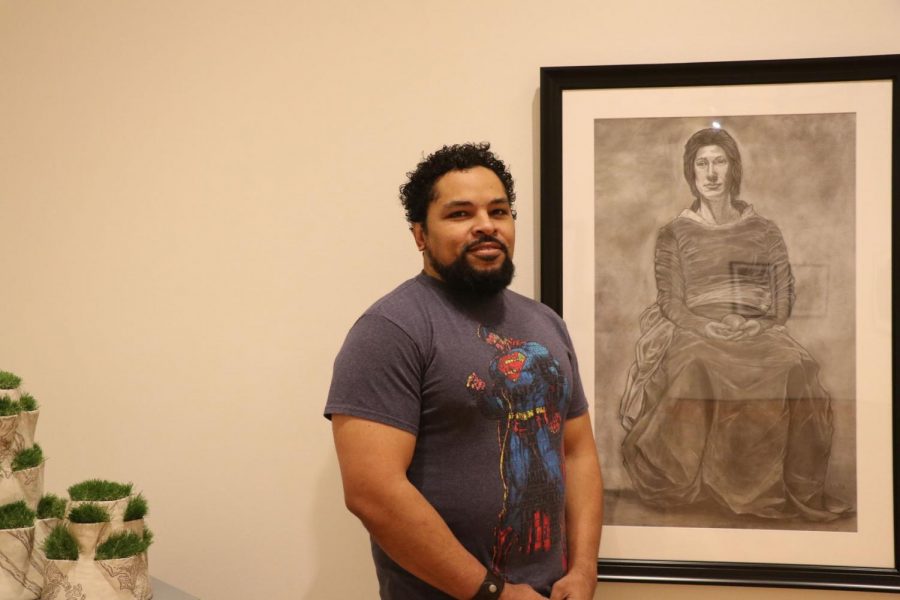 Passion of art. Aldrick Scott is a senior art major. He shared his story of survival with his art works.

Senior art major Aldrick Scott, graphic design emphasis, shared his story of survival with his passion of art through his senior exhibition show.

“I talked about the stuff that I faced, especially that I faced when I was over there in Iraq and the Middle-East,” said Scott. “I used my art to get through that difficult time period.”

He retired from the military after serving 20 years in both the Marine Corps and the Army. Afterward, he came to Washburn and worked on his bachelor’s degree in fine arts.

“When I came back I had a fear of enclosed spaces and I couldn’t be around people, so I learned to how to deal with that,” said Scott.

Scott held his senior exhibition “Wounded Ink” at the John R. Adams Gallery in the Art Building from April 1 to 12. He uses art as one of his healing processes of Post-Traumatic Stress Disorder.

“It’s me using art as a form to fight PTSD,” said Scott. “It covers the time period that I did six deployments to Iraq during the Marine Corps and the Army.”

According to American Psychiatric Association, PTSD is a psychiatric disorder that can occur in people who have experienced or witnessed a traumatic event such as a natural disaster, a serious accident, a terrorist act, war or combat, rape or other violent personal assault.

Miku Motoi is a senior art major. When she went to class in the art building, she saw Scott’s “Wounded Ink” exhibition.

“What I could feel from his pieces was sad emotions,” said Motoi. “The girl’s piece caught my eyes first because of her face and body expression.”

This piece is called “Against the Wall.” Some pieces of the exhibition include “A Warriors Salute,” “22 Reasons” and “Banished.”

“Some people can have traumatic experience and think they are not worth it,” said Scott. “My message is clear that no matter what happened to you, you are still worth it.”

Scott also spent time teaching and competing in tournaments for Modern Army Combatives and Jiu-Jitsu. These activities help him heal from PTSD.

“You have a purpose in life to continue on, and it’s ok that that happened to you,” said Scott. “It’s not ok that the incident happened, but it’s ok to go on living.”

Scott plans to graduate in May 2019. He plans to either go to graduate school or get a job in graphic design after he graduates. He wants to be an animator or be a part of movies.

“I just keep on growing to see where it takes me,” said Scott. “Hopefully it’ll take me really far.”