Learning from everyone: A well-rounded non-profit experience leads to a comprehensive understanding of poverty 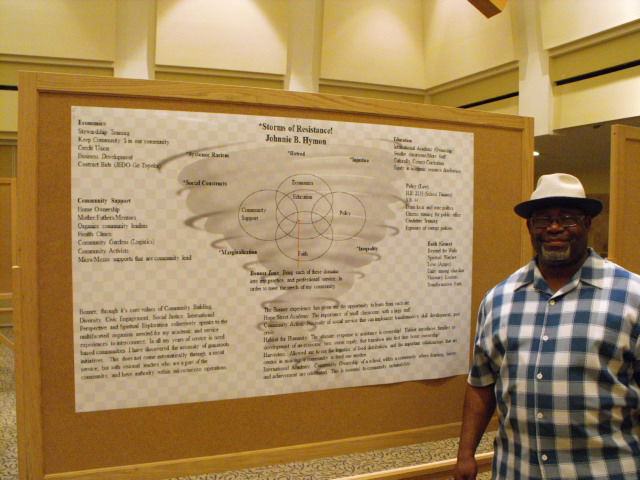 A non-profit approach: Connecting his many years of community service, Senior Social Work major, John Hymon, introduces his APRON presentation titled “Storms of Resistance!” The presentation’s focal point is a diagram of a tornado that helps to explain the interconnected systems involved with the systemic issue of Poverty.

John Hymon, senior social work major, built his Aperion presentation from his depth of knowledge he acquired over his time in the LinC-Bonner Scholar program. During his time in the program, Hymon volunteered at five Topeka non-profit organizations.

“Each placement that I was at taught me something,” said Hymon. “I first started at Hope Street Academy, second came Community Action, then Habitat for Humanity and Harvesters thereafter. Now, I am at my fifth placement which is at the International Academy.”

These five non-profit placements helped Hymon develop the basis for his senior capstone project where he combined his experiences and breadth of knowledge to conform into a presentation titled “Storms of Resistance!”

The learning didn’t stop there as the social work major transitioned to Harvesters.

“Harvesters taught me about the logistics of food,” said Hymon. “Everything that goes behind food and how to be self-sustaining when a community is facing a food desert situation.”

Hymon continued his non-profit work making a couple of more stops before coming to the start of his senior year as a non-traditional student.

“I put all of those pieces together and by the time I was ready for my practicum I had realized that the centerpiece of it all is education,” said Hymon. “We need that piece and that is central.”

The diagram of a tornado helps to explain the deep rotational impact that poverty has on its victims.

According to Hymon, education is central because of the importance of conscious recognition and discussion among peers and young children for the better of this country’s future.

“I learned that if we’re in a process that’s degrading then you can quickly become a part of that storm and that system,” said Hymon. “People manipulate others because they feel as if they have to in order to survive.”

Hymon ended his social work presentation with his view on the key contributor to a marginalized system in America.

“It’s not all about the dominant white culture. That’s a big part of it but ‘if you’ve been in there too long then you end up getting addicted to it. When someone tries to pull you out then you may start perceiving them as the enemy rather than just someone who’s trying to broaden your way of thinking, or raise your level of consciousness,” said Hymon.

Hymon has recently been accepted to the Mater’s program at the University of Kansas and plans to start there this fall.