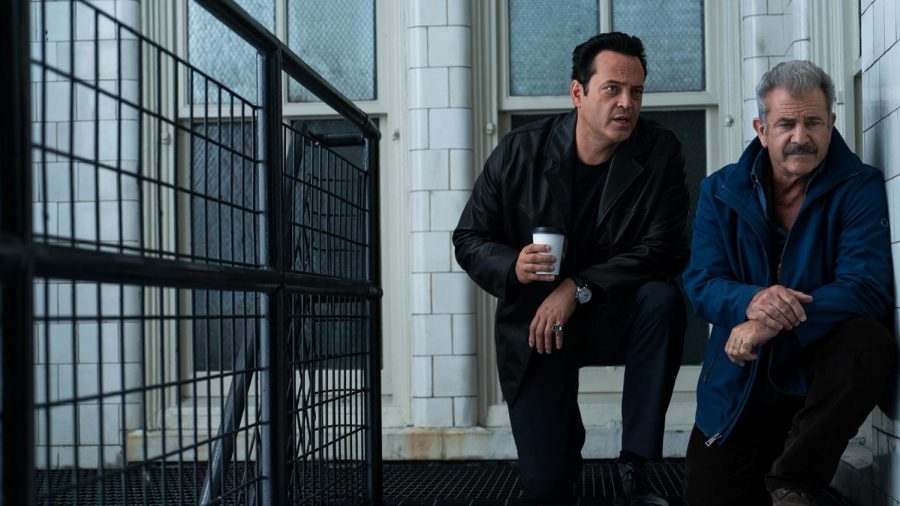 Shotgun safari: While some of the film's ideas may make viewers uncomfortable, its quality cannot be discounted because of it. Pictured are Vince Vaughn and Mel Gibson, who make a wonderful duo on screen.

“Dragged Across Concrete,” directed by S. Craig Zahler is a perplexing film, sort of the middle ground between it has such great aspects while at the same time being so subjective and problematic that I wasn’t sure if I liked it or not. Nonetheless, the movie is about Anthony (Vince Vaughn) and Richard (Mel Gibson), two incredibly corrupt policemen that get suspended for brutality, and resort to crime to make ends meet.

What follows, in very similar fashion to Zahler’s two previous films “Bone Tomahawk” and “Brawl in Cell Block 99,” is long drawn out scenes of dialogue and slight humor that eventually leads to a very climactic and intense ending.

Joining Gibson and Vaughn is a rather formidable cast. Tory Kittles is the biggest standout, with others being Jennifer Carpenter, Michael Jai White and Laurie Holden.

In terms of delivering on the wonderful dialogue and the climatic buildup, it absolutely does. Vaughn and Gibson both give excellent performances, and play off each other very well. I always thoroughly enjoy Vaughn’s serious performances (like True Detective), and this is no exception. This dialogue, which the best comparison I can think of is Tarantino or Lynch dialogue, is just really drawn out in the best possible way. The best example I can think of is a single anxiety-inducing scene where Vaughn and Gibson are doing a stakeout. Vaughn just eats a sandwich for like 3 minutes. You as the audience relate to Gibson, as you can just feel him getting more and more annoyed, and a lot of other scenes play like that. They make you incredibly anxious, and while it is off-putting, it is done so well for people who appreciate it.

Now comes the aspect of it that makes this film one of the most polarizing films I have ever seen, and that is its ideals. Films are meant to be interpreted, and this film is by all means no exception. I have never seen a film at one minute incredibly unlikable and off putting, but still quality. Times have changed, the buddy cop thing doesn’t quite work as much as it used to, and the film seems to slant Richard and Anthony as the good guys, when they are absolutely not. As of now that’s the way I interpret it: they are made to be rooted before, but Much like Michael Douglas’s William from ‘Falling Down’, they are very questionable, and it leans into some politics that is incredibly polarizing and honestly made me feel sick to my stomach at times.

That’s the thing about this movie. Even if there is that uncomfortable aspect the film has going for it, it is an undeniably great film, and there is nothing divisive about it. It is so tightly crafted and well made, regardless of what I think of some of its views or not.I never thought I’d be able to see Gibson in a film and actually find enjoyment out of it, but the core duo of Vaughn and Gibson makes this film so watchable.