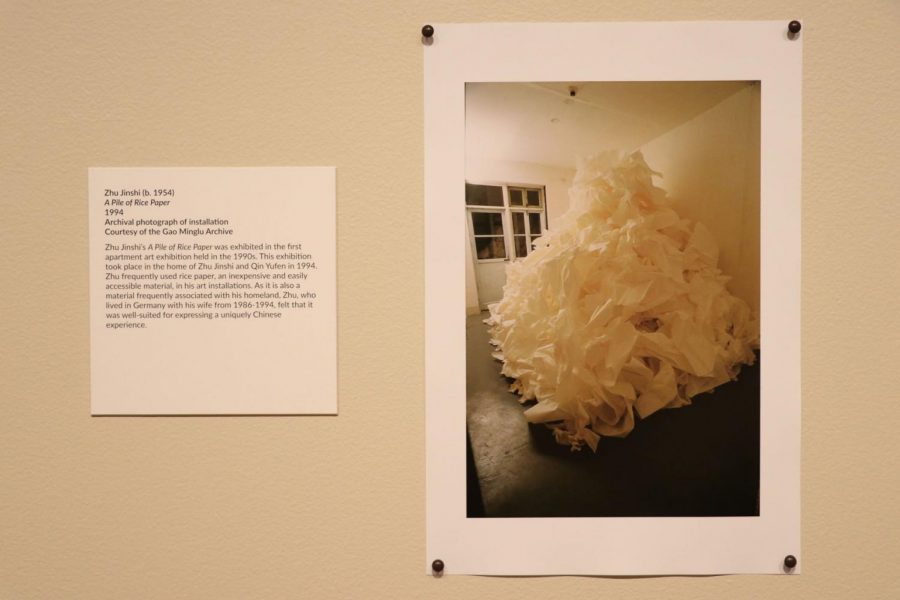 Apartment art: The Unpacking Chinese Apartment Art exhibition is on display through May 18 in Mulvane Art Museum.This art piece, "A Pile of Rice Paper," was made by Zhu Jinshi in 1994.

The Unpacking Chinese Apartment Art exhibition is on display from April 5 through May 18 in the Adeline Peers Galleries at the entrance of Mulvane Art Museum. It’s curated by Madeline Eschenburg, a lecturer in art history.

“The reason why Apartment Art exists in the first place is because after 1970s in China, the cultural environment went through different periods of tightening, loosening, control of cultural expression,” said Eschenburg. “It’s illegal for contemporary artists to create an exhibit artwork, so they had to find underground ways to do it. What they did is they exhibited in their own apartments.”

According to the Mulvane Art Museum, in the 1970s to 1990s, the creation and exhibition of contemporary art was limited or even outlawed by the Chinese central government. Unpacking Chinese Apartment Art explores the creative strategies of seven artists working within this context, despite political and economic barriers. The exhibition features a video of interviews and archival photographs documenting the artistic practices of individuals who participated in this urban art moment.

“People can learn about the recent history in China. They can appreciate the creative strategies these artists used in a very repressive environment,” said Eschenburg. “It can perhaps make them think of the relationship between individuals and the government.”

Sanford E. Pomerantz is a senior audit student studying physics, art and languages. He attended the exhibition discussion, In Search of Creative Autonomy, of the Chinese Apartment Art exhibition on April 10.

“It was interesting to see the cultural differences,” said Pomerantz. “There was one art where he [the artist] shredded a whole bunch of paper to make it look like a mountain of rise.”

Eschenburg began to be interested in Chinese contemporary art when she was getting a master’s degree at SUNY at Buffalo. In the seminar in contemporary Chinese art, she found that a lot of the artists were making art works that she cared about, like globalization, the effect of global capitalism, the individual and urbanization, according to Eschenburg.

The Unpacking Chinese Apartment exhibition also represent the theme of WUmester 2019, the freedom of speech.

“This is sort of a creative way of these artists to create art and share art with each other in a political repressive situation,” said Eschenburg.