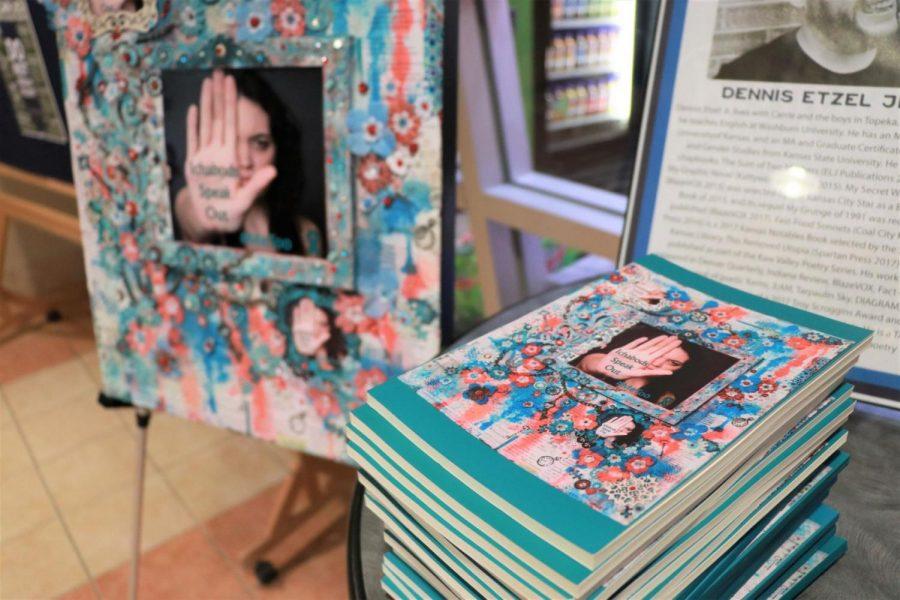 Be aware: Every April is the national Sexual Assault Awareness Month. The Art for Thought exhibition featured arts and poetry against sexual assault.

An Art for Thought exhibition featuring Sexual Assault Awareness Month, partnering with Counselling Services, is being presented at the Memorial Union through April 18. It features art and poetry by Michaela Butterworth, a mixed media artist, and Dennis Etzel Jr., an English professor at Washburn.

“We need to build a campus of consent,” said Etzel. “As a collective humanity, we need to stop all forms of oppression.”

Every April, the National Sexual Violence Resource Center coordinates the national Sexual Assault Awareness Month campaign. It aims to raise public awareness about sexual violence and educate communities on how to prevent. The campaign theme, “I Ask,” champions the message that asking for consent is a healthy, normal and necessary part of everyday interactions, according to NSVRC.

Lindavista Benitez, a freshman history secondary education major, watched the exhibition as she went by the union.

“Many people don’t understand what sexual harassment is or know much about it,” said Benitez. “At first, I didn’t know much about it until I learned about it more, and it gave me more awareness that this happens on a daily bases here, at work, and outside.”

The exhibition presents many studies and statistics about sexual assault. Sexual assault can happen in homes or a public area. 63 percent of sexual assaults occur at the home of the victim and 18 percent in public areas. Only 15 percent of victims report to police and one in ten perpetrators are convicted.

According to NSVRC, one in two women and one in five men have experienced sexual violence other than rape in their lifetime. One in five women have experienced completed or attempted rape in their lives and 41 percent of women reported experiencing physically aggressive street harassment. One in six boys are sexually abused before age 16. Among college women, nine out of ten victims of sexual assault knew the person who sexually assaulted them.

“Statistically, one out of four women in college will be sexually assaulted,” said Etzel. “That means we are all effected by this horror, that we know someone who has survived even though we don’t know they have survived.”

Michaela Butterworth’s art works are also presented at the exhibition, including an art piece “Handmade with Love.” Butterworth is an Australian mixed media artist living in Topeka, KS. She works as an instructional designer and facilitator for the Department of Revenue. She’s an advocate for survivors of domestic violence, sexual abuse, human trafficking, child abuse and narcissistic personality disorder abuse.

People who walk by the exhibition can feel free to take a copy of the book “Ichabods Speak Out,” which was created by different departments in Washburn and edited by Dennis Etzel Jr. and Jericho Hockett, a professor of psychology. It’s a collection of poems that speaks up and out against sexual assault for publishing consideration.

Etzel is not only an English professor, but also a TALK Scholar for the Kansas Humanities Council and he leads poetry workshops in various Kansas spaces.

“Speaking about it and against it shows people who have survived that they are not alone,” said Etzel. “It also shows others this is a serious epidemic.”