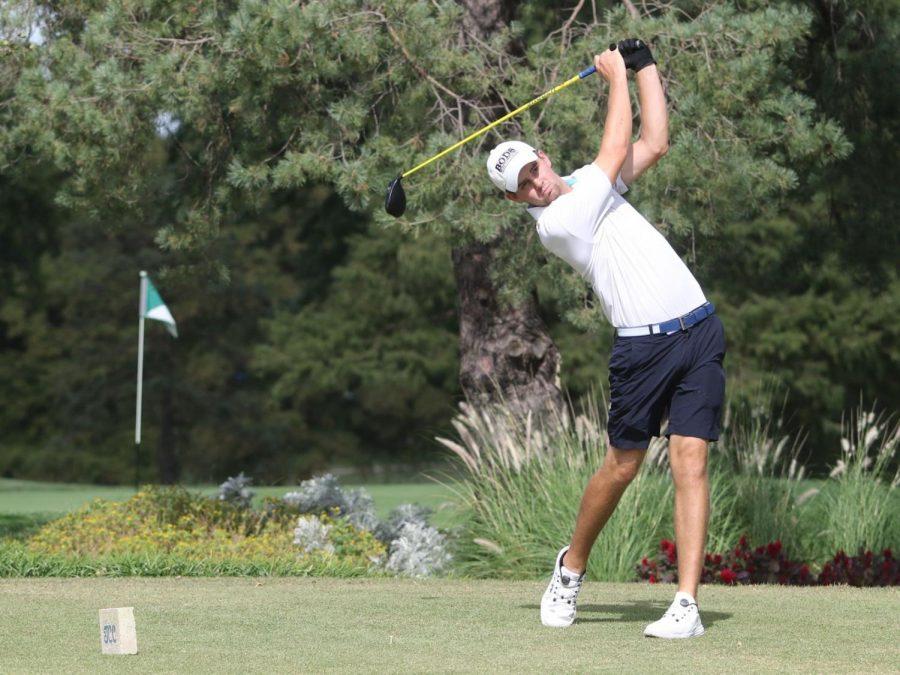 Tee off: Senior Nathan Roy hits a tee shot down the fairway. Roy has returned to his hometown to finish off his college golf career.

With the spring season off and running, there are many Washburn athletes competing in a variety of sports. Some of the most unheralded athletes are the golfers. Despite not getting much fanfare, the team has started out the season strong with a good performance in Las Vegas and winning their home Washburn Invitational. Helping lead the 2019 squad is senior Nathan Roy.

Roy was born and raised in Topeka and has returned to finish out his college career at Washburn after transferring. He is the son of Jim and Mary Roy. His father is a retired Topeka police officer who also coached golf at Hayden High School. His mother has been working at Stormont Vail in Topeka for more than 35 years.

Graduating from Hayden High School, Roy saw success in high school by helping lead his team to a 4A State Championship in the spring of his junior year. He also earned All-City honors the same year.

Roy’s college career began at Garden City Community College where he spent two seasons and was ranked inside Golfstat’s Top 150 players in the nation both years.

To begin his junior year, Roy attended St. Gregory’s University in Shawnee, Oklahoma, but was forced to transfer after the fall semester when the school was shut down.

Being able to come back to Washburn was a sort of dream-come-true for Roy.

“I kind of wanted to come to Washburn out of high school,” said Roy. “I just don’t think I had the game to do it, so I transferred off and worked hard and got the chance to come back here. I’ve enjoyed it, being able to come back to my hometown.”

Roy’s teammate, senior Brock Falley, has had a front row seat to Roy’s hard work and has seen it transfer into competition.

“He’s out here working every day,” said Falley. “He works really hard so when he gets into competition and stressful situations he has a lot of things he can fall back because he knows how to do it. He’s done it so many times in practice. I’d say his hard work pushes everybody else because when he’s out here working it makes everyone else want to get out here work as well.”

At Washburn, Roy is majoring in physical education with a minor in coaching. His goals after college are to stay within the field of golf and coaching and he wants to teach younger generations.

“I like being involved with the kids, and the traveling is great too,” said Roy.

Being a collegiate athlete is extremely difficult because of the commitment it takes while still having to maintain your school work at the same time. Roy’s favorite part about Washburn isn’t necessarily the learning part, but rather the friendliness of the staff.

“I like the teachers for the most part,” said Roy. “They’re normally pretty cooperative when we’re in and out. Even if we’re in class all the time or not, they still kind of check up on you and see how you’re doing.”

Golf has been a sort of dream job for Roy. It allows him to be competitive, which he has been from a young age, but it’s also a relaxing sport that he can play the rest of his life. Roy grew up playing all different kinds of sports including basketball and soccer in high school but stuck with golf because he saw the most potential there.

Roy got to experience the competitiveness of golf at its highest level in college when he got the opportunity to attend the Division 1 golf championships in Stillwater, Oklahoma, where Oklahoma State won the title.

“I got to watch inside the ropes and walk directly with them so that was really cool for me,” said Roy.

Where the Division 1 championships are a career highlight for many, Roy recently experienced his career best moment during the Washburn Invitational. In the midst of what had been an unsuccessful first day of the tournament, Roy managed to hit a shot that would brighten anybody’s day, a hole-in-one. It was an exciting moment because it was the first hole-in-one in his life. To make it better, it came on his home course during his senior year with his parents in attendance.

Roy hopes that some of that success will carry over when he and his team hit the links again April 5 in Kansas City for the NSIC Preview.