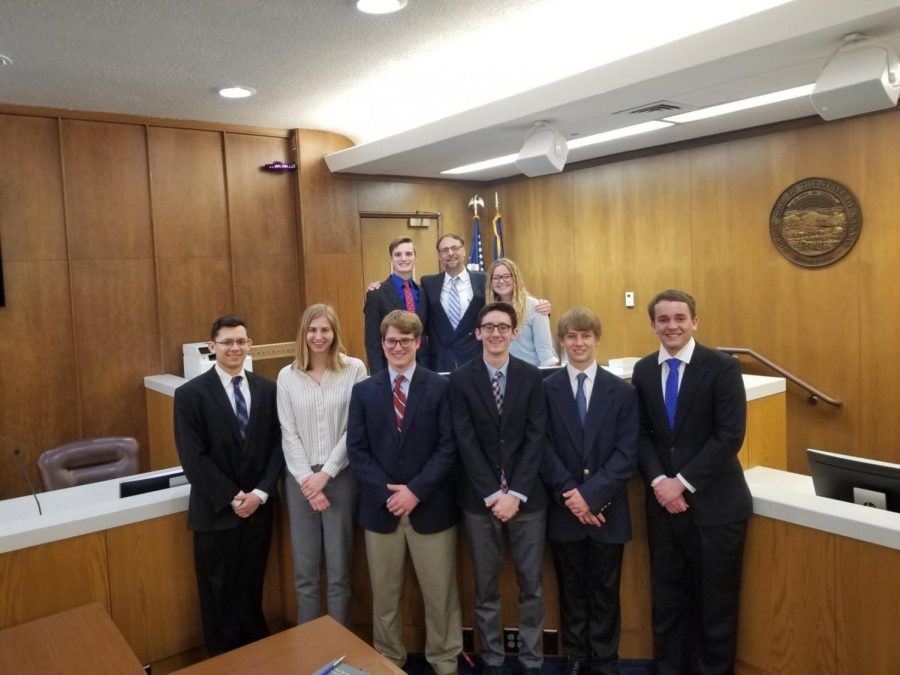 Nationals or bust: The Hayden High School team placed second at regionals and second at state competition as a first-year program. The coaches and team head to Athens, Georgia, on May 16 for the national tournament.

Webb became interested in Mock Trial after attending a camp hosted by Washburn when she was a junior in high school. After transferring to Washburn from Butler County Community College, Webb reached out to Danielle Hall, director of Mock Trial and adjunct professor of communication studies, to try out for the team.

Soliday has been involved with Mock Trial since he was a freshman in high school. Thus, he continued to compete as a college student once he came to Washburn. This year marks his seventh year doing Mock Trial.

Mock Trial is a combination of debate and forensics with theater. Each year, the Mock Trial team is presented with a case of 150 pages and documents that they must study and organize. Part of this process includes sorting facts, creating arguments, adding theatrical components and assigning roles to each of the six members on the team.

“Basically, we get a case and analyze it. You’re given witnesses, and you put together your own case design like how you would present it in an actual courtroom. We do both prosecution and defense,” said Webb. “The best way to explain it is that it’s just a mock of a courtroom setting… So you get experience in the courtroom and how to try a case.”

Three of the members will role play as witnesses and the other three act as the attorneys.

“For the witness roles, we get to become a character and really play it out. My most memorable role was I was Detective Murdock Nichols, and so I did a New York accent. It was just really fun, and I also got a lot of awards for it,” Soliday said.

Going into each competition, teams are unaware of which side of the case they will be arguing. Thus, the Mock Trial team must be prepared to argue both sides. At the invitationals and tournaments, the team is assessed both as a team and individually.

High school Mock Trial begins in January and goes until regionals in February. If the team places top three at the regional competition, then they compete at state in March. The first place team at state advances to the national competition

Soliday met Travis Lamb, the Mock Trial coach of Hayden High School, last year when he was judging the high school state Mock Trial competition. Soliday offered to help Lamb, an alumni of Washburn Law, with the first-year program at Hayden. Soliday then asked Webb to come to the high school team’s first practice with him. The dynamic duo then became coaches for Hayden after being officially asked by Lamb.

Soliday and Webb had to teach the Hayden Mock Trial team about the different components of Mock Trial. As a first-year program, none of the students had experience. Thus, each week, Soliday and Webb spent about three weekday mornings, and sometimes afternoons, working with the team.

“Now, preparing for nationals, it’s a lot more time and dedication because they only have a month until we leave for Georgia. They have a lot going on and so do we [Soliday and Webb], so we’re trying to put in as much time as we can to get them prepared,” said Webb.

Being a part of the Mock Trial team teaches you about public speaking, organization and professionalism. While it is beneficial for those wanting to attend law school, anybody can join Mock Trial.

The parents of a student on Hayden’s team talked to Webb about her impact on their son. The parents told Webb that their son wasn’t sure what he wanted to do, but joining Mock Trial helped him find his interest in law.

“That’s always a good thing to hear,” said Webb, “It was more directed towards Caleb and I about how we just fuel their passion for law and really get them interested in all of that. It’s a rewarding experience, for sure.”

The Hayden High School Mock Trial team will compete at the national competition May 16 to May 18 in Athens, Georgia.

Soliday and Webb are fundraising to attend the national competition with their students. Visit their GoFundMe at gf.me/u/r3sjf6.