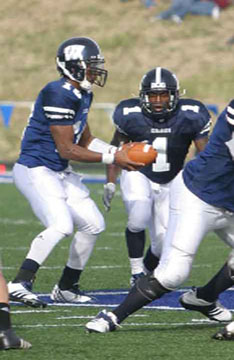 The Emporia State Hornets received their fair share of “Sorry!” cards Saturday, as they had three turnovers and a block punt, that allowed the Bods roll to their fourth straight homecoming victory 37-6.

“You have Homecoming and that’s always an added incentive to win,” said Craig Schurig, head coach. “When you have a three-game losing streak that’s another and then you add Emporia State as a rival. I really think our kids focused hard on their jobs today and played like we’ve seen them play in practice.”

The Bods converted 21 points on Hornets’ mistakes. “Sorry!” card number one came with 2:28 left in the first half when freshman linebacker Zach Watkins picked off a pass and returned it 19 yards for a touchdown, giving the Bods a 14-6 lead.

“Creating turnovers is what we wanted to do all week,” said Watkins. “But we focused on shutting them down first. If we could go score some points our self with our offense, we knew we would be alright.”

The Bods offense converted 14 points on two huge defensive plays by All-American senior corner, Fletcher Terrell. Terrell blocked a punt on the Hornets first possession of the third quarter to set up a touchdown drive from the Hornet 17.

Then right after the punt block, Terrell came up big again. Terrell picked off a pass from Hornet quarterback, Justin Whitworth ,to set up another Bod touchdown drive.

“We can be really explosive and we were,” said Schurig. “We were explosive on offense, defense and special teams. We got guys the ball and distributed it. Guys that could do something with the ball all got touches. That was more indicative of our team to do that.”

The Bods 5-4, 4-3 in the MIAA, will travel to Missouri Southern next week in a must win situation. A win for the seniors and a win for a maybe long shot Mineral Water Bowl bid.

“We’ve kind of tried to challenge our kids that our seniors deserve our best and they got to give us their best and everybody has to give them their best,” said Schurig. “They deserve to end the season on a high note. We have two tough games. We play at Missouri Southern, who is playing well and then here, against Missouri Western. Both games are going to be hard fought games but if we play like we are capable of, we can give ourselves a great chance to win.”