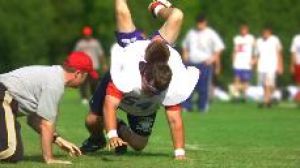 So when I saw the summary of “Facing the Giants” on the Internet, I thought it sounded like a really good movie. The summary basically said it was about a high school football coach whose best player changes school right before the season starts. Then, a group of parents decides the coach isn’t doing a good job and they plot to get him fired.

Well, this all happened in the movie, but it was the main plot for about a nanosecond.

The movie actually was about how the coach turned to God to help him through his hard times as a coach and a husband. He then changes his entire coaching philosophy to how playing football is a way to honor God, which should be done no matter if the team wins or loses. This coaching philosophy sparks a religious revival throughout the whole school and, of course, helps his team improve.

So here I am, sitting in the movie theater thinking, “Geez, I really must not have read the whole summary.” Which is somewhat true, because checking the summary later, I discover I hadn’t clicked on the full summary button. Oops.

But I am a religious person and even if I had read the part of the summary that said he turns to God for guidance, I think I still would have gone to the movie. In fact, I might have even been more prone to go to it.

However, not being prepared for the focus to be mainly on religion definitely caught me off guard. Especially since it was over the top and highly dramatic.

My friends and I left the theater making jokes about how after seeing the movie, we didn’t even feel like we needed to go to church on Sunday because we just had an hour and half sermon. But then again, our pastor has been talking about the Packers a lot lately, so if we went to church we would get to hear about football, since we didn’t get much of that in the movie.

Let me clear this up, it really wasn’t the religious part that was bad – it was the acting. So now I was thinking, “I really need to start looking at who is going to be in the movie instead of just the summary.”

Some of the stars in the movie were Alex Kendrick, Shannen Fields and Bailey Cave. Heard of any of them? Probably not. Kendrick is the media and teaching pastor at Sherwood Baptist Church in Albany, Ga. Fields is the wife of the local football coach and Cave is a high school senior. All actors in the movie were actually volunteers.

No wonder I thought I could have acted as well as the people in the movie – they really were just regular people. After finding this out, I felt a little bad about making fun of their not-so-expert acting skills.

But not nearly as bad as I felt when I found out the movie was funded, written, directed and produced by Sherwood Baptist Church in order to raise money to build a 40-acre youth recreational park for the Albany community.

Even though the movie wasn’t solely football, it had some very preachy parts and some, well, let’s say interesting acting, I now feel like it was definitely worth seeing. For being made completely by amateurs and making it to the big screen, I would have to say they did a great job.

And if I had known that it was made by a church to raise money, I definitely would have gone to see it.