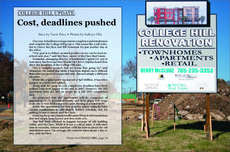 One year to build several apartment complexes and townhomes and complete the College Hill project. This seems like a tall order, but to Henry McClure and Bill Newsome it’s just another day at the office.

“Our goal is to deliver as much product as we can by back-to-school next year,” said McClure, owner of McClure Real Estate.

Newsome, managing director of Southwind Capital LLC out of Lawrence, has been partnered with McClure’s Topeka-based firm since the inception of the College Hill plan.

“It’s a complex project, but we knew that going in,” said Newsome. He added that while it has been slightly more difficult than other projects of comparable size, this was simply a different situation.

While the original price tag was set at $25 million, it has since jumped to a hefty $30 million.

Along with the jump in cost, completion deadlines have been pushed from next August to the end of 2007. However, the 183 apartment units are still on target for a fall 2007 completion date.

It’s projected that the apartments will be comprised of approximately 75 percent students, and floor plans will range from one to four bedrooms with units starting at around $600.

While the apartments are first priority, minor setbacks have caused construction to fall slightly behind schedule, but it’s nothing to worry about, said McClure.

Delaying the project has been the unearthing of old foundations that had simply been buried and then built over.

This had been allowed to happen because of old building codes, said McClure. While it is not a critical issue, it still takes time to excavate, remove and then refill the hole in which the old foundations were. On average, the removal takes about a day or two, said McClure.

“We do this every day,” said Newsome. “This doesn’t mean we can perform magic, and we’re a little behind where we want to be, but it’s still an achievable schedule.”

On the bureaucratic front, McClure and Newsome both agreed that the Tax Incremental Financing process has been detailed but necessary. TIF is a governmental financing program which assesses the future gains in taxes from a project and uses the projected amount to help pay for construction costs. In essence, it allows the government to fund the project in the hopes that future tax revenues will repay the amount.

“The TIF process itself is very detailed,” said McClure. “It’s a meticulous process that you have to go through. It gives everyone ample notice to complain, interject, support, and it gives everyone time to make deals.”

McClure added that he wanted to thank the students who came and spoke in favor for the renovation of College Hill at the city council meetings and that they were key in swaying the council.