Washburn is in compliance with Title 9 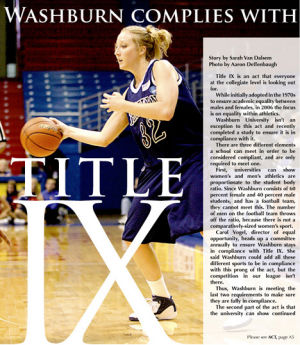 Title IX is an act that everyone at the collegiate level is looking out for.

While initially adopted in the 1970s to ensure academic equality between males and females, in 2006 the focus is on equality within athletics.

Washburn University isn’t an exception to this act and recently completed a study to ensure it is in compliance with it.

There are three different elements a school can meet in order to be considered compliant, and are only required to meet one.

First, universities can show women’s and men’s athletics are proportionate to the student body ratio. Since Washburn consists of 60 percent female and 40 percent male students, and has a football team, they cannot meet this. The number of men on the football team throws off the ratio, because there is not a comparatively-sized women’s sport.

Carol Vogel, director of equal opportunity, heads up a committee annually to ensure Washburn stays in compliance with Title IX. She said Washburn could add all these different sports to be in compliance with this prong of the act, but the competition in our league isn’t there.

Thus, Washburn is meeting the last two requirements to make sure they are fully in compliance.

The second part of the act is that the university can show continued efforts to increase the amount of sports for the underrepresented group. When Washburn added women’s soccer as a sport in 2003, they met this requirement, because there was a growing interest in the sport and Washburn answered that interest by creating the team.

“It’s clearly been a success story too,” said Vogel, as the soccer team won the MIAA title this year.

The third prong to the act is that universities can show they are fully accommodating both men’s and women’s sports. Washburn recently completed a study to ensure they were meeting these requirements, and will be administering another survey this spring.

The first study, approved by the NCAA, is administered to PE 198 classes. The sample size has mixed demographics because everyone is required to take the course. The second study, which is approved by the Office of Civil Rights, will be conducted in the spring online. Vogel said there are foreseeable problems with the survey from the OCR because every “no response” counts as not showing an interest, and the results could be skewed.

” Your response rate could be very high or very low,” said Vogel. “We have an insurance policy by doing both surveys.”

Vogel said they will look at both surveys to ensure they are compliant with prong three of Title IX, and if there are significant differences between the results, they will have to find another way to measure whether they are accommodating the students.

They are not only completing studies to meet the third part, but they are also making an annual check to make sure travel, locker rooms, uniforms and financial aid are equal in men’s and women’s sports.