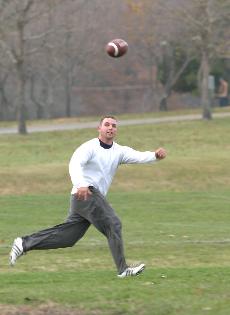 Although the Ichabods’ football season has come to a close, it doesn’t mean football in general on Washburn’s campus is done.

Two flag football teams at Washburn, the Murphballs and Speed Kills, combined players to compete in Lincoln, Neb., at the 2006 Nebraska Flag Football Regional at the University of Nebraska. It will be the third year in a row a team from Washburn has competed, however the past two years the team was comprised solely of the Murphballs squad.

“We’ve practiced a lot more this year than in the past,” said Josh Seematter, captain and player for the Murphballs. “And this year we actually combined participants from the top two teams at Washburn.”

In 2004, the Murphballs went winless at 0-2. In 2005 they faired better going 2-2, including a 26-20 victory in the first round of bracket play against the team from Kansas University.

“We’re hoping to win more than three games because you just want to get better every year and represent Washburn well,” said Seematter.

Intramural flag football is seven on seven with an 80-yard long field. Teams must go 20 yards for a first down and there are two 20-minute halves with a running clock. Touchdowns are worth six points with extra point attempts worth one, two or three points.

As a result of the Murphballs yearly treks to the regional tournament, intramural flag football at Washburn has seen a rise in participation and skill level.

“We’ve helped out the competition at Washburn a lot because we went from having 10 teams last year sign up for intramurals to 16 plus this year,” said Seematter. “By bringing back these ideas and telling other people about flag football and where you can go with it, it’s a lot more interesting.”