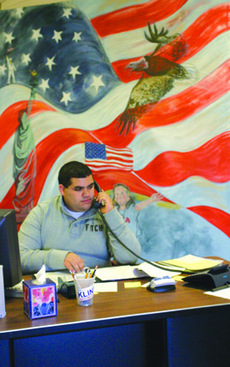 Tomorrow is the day. Tomorrow will determine who will be our next leaders. Will it be Kline or Morrison; Barnett or Sebelius; Ryun or Boyda? No one really knows. However, there is one thing that everyone can be sure about – the countless hours of work that comes with the preparation for elections. There are many people who help the candidates prepare and campaign, including some Washburn University students.

Shanna Bruce, sophomore history major, has worked in the office of Ron Thornburgh, Kansas Secretary of State, since August 2005. She obtained the position by applying online. In the office, Bruce is responsible for filing correspondents and handling the records of privately owned cemeteries in Kansas. She will also be helping with tomorrow’s election by recording the numbers from the ballots into the computer system.

“After working around the political scene, I’ve realized that politics is a lot more complex than most people think,” said Bruce. “You have to not only give speeches, but you also have to meet and talk with people and organizations and travel to many different counties.”

Bruce hopes to gain a better understanding of state government from working in Secretary Thornburgh’s office.

“I really wish that more young people would get involved with the government,” said Bruce. “They do have a voice.”

Angel Romero, freshman political science major, works for Kansas Attorney General candidate Phill Kline. He has been there since September when he walked into the office and volunteered his time. He heard they needed help on the news and wanted to offer his help, because he knew it was going to be a close race.

“I do anything and everything at the office,” said Romero. “The biggest thing is the lit. drops. We take any literature about the campaign, such as brochures, bumper stickers or yard signs, and drop them off to county chairs. This ensures that word is getting out about the election.”

Romero said getting the word out to citizens is priority, because it is such a close election. To further this, Republican candidates went on a bus tour this past week to talk to different cities and inform their citizens about the election.

as to what goes into the campaign and what I will have to endure during the campaign. The experience will also help me to build connections with people who may be able to help me in the future.”

Also building connections is Britain Stites, senior political science major. Since September, he has been volunteering for Shelley Buhler, who is running for Shawnee County Commissioner in District 1. He was informed of the opportunity when Buhler asked for volunteers through Washburn’s political science department.

“I volunteered because I wanted to gain a stepping stone in regards to my networks as well as my perspective and abilities,” said Stites.

As a volunteer, Stites helped with the initial strategies of the campaign. He has done numerous literature drops, which helps educate voters about the county commissioner race. Stites said it encourages voters to vote for an independent voice for county commissioner.

“I’ve learned that campaigning is a lot of hard work, but that it’s definitely worth it,” said Stites. “Volunteering has opened doors to careers in the field and it’s good exercise, particularly for a college student.”

Christopher Mowder, president of the College Republicans, also took the opportunity to be politically involved when he volunteered his time at the Jim Ryun rally held at Forbes Field on Sunday, Nov. 5. The Kansas Republican Headquarters contacted him to see if he would be interested in helping with the rally and also if he could gather more volunteers for the event.

At the rally, President George W. Bush delivered a speech in favor of Ryun and his campaign. The speech was intended to boost the re-election hopes of Republican Congressman Ryun. Ryun’s campaign manger said the congressman was “ecstatic” to have Bush in Topeka.

“I think it is important for students to engage in debate and discussion about politics no matter what side you are on,” said Mowder. “Having the president come to Topeka was a fantastic opportunity, and while it was certainly meant to support Ryun, I really hope it encouraged people to become more informed and involved with politics for this election and for the future.”