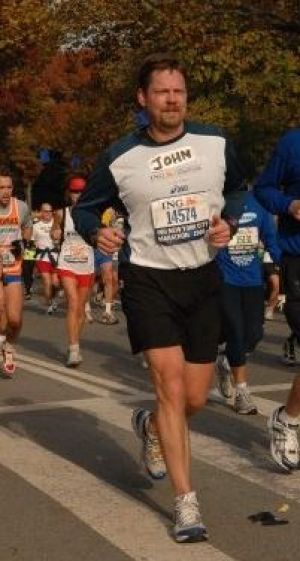 There may not be a reset button in the game of life, but no one said there couldn’t be a redo button.

John Mullican, an associate professor in the Washburn biology department, ran the New York City marathon in 5 hours 24 minutes in 1986 at the age of 23. Twenty years later at age 43, he competed in the 37th running of the marathon Sunday, Nov. 5, and finished in a time of 4:20.

“Running through the five boroughs of New York is pretty awe-inspiring,” said Mullican.

Awe-inspiring enough to slice over an hour of his time from 20 years ago when he was just a student in college.

Mullican finished the course through the five boroughs in the top 48 percent of the almost 38,000 runners who finished. However, he has his goal set a little higher.

“I would like to try and do it at least one more time and break four hours,” said Mullican.

What makes his time and goal even more impressive are the events leading up to them. Back in the late ’80s, once Mullican hit graduate school, he stopped running and working out and started to gain weight. That pattern, or lack thereof, continued for 17 years until a knee problem developed.

“I had knee surgery,” said Mullican. “I tore my patellar tendon about 30 percent off, and so I had that surgically repaired over spring break of ’04. I vowed to myself then that I would lose weight and start working out and running again.”

After being laid up for six weeks after surgery, the road to recovery began slowly, on a stationary bike in his basement.

Once he started, he didn’t stop. He continued to run and the pain from his knee injury slowly receded to none. His experience with surgery led him to the realization that age has its limitations, and time was not going to wait forever for him.

“I’ve got my lifestyle back now that I enjoyed in college,” said Mullican. “So it was more of a matter where I was getting to the age where I thought if I don’t do something now, it might be tough to do it later. Having the knee surgery kind of inspired me.”

That inspiration led to the New York marathon, along with two triathlons, three half marathons and two other marathons, all within this year.

Mullican continues to run for fun. He has his sights set on a half Iron Man marathon before possibly attempting a full Iron Man. Even if an Iron Man isn’t in the cards, his reestablished active life he has not had since college is something he plans to hold on to.

“I’m kind of there now,” said Mullican. “I was that way in college, and then for 17 years I didn’t have that and I struggled. I didn’t live a very healthy life. Now I’m living a healthy life again.”