Strike Four a barbershop quartet to be reckoned with 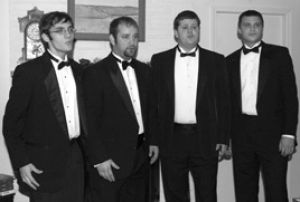 Standing in front of the fireplace the four men of the Strike Four, a Topeka-based barbershop quartet, sang the song made famous by the Staler Brother’s “Hello, Mary Lou.”

It was their second time through the piece – ever. The song opened well, the full-bodied chords streaming out musically, and then a reprise.

“I think the musical term on that is a train wreck,” said Rick Kready, the coach of Strike Four.

“But really,” said Kready, “I’m proud of you. This is a new piece and it’s not an easy arrangement.”

An intense session of hammering out notes follows. The quartet moves to the keyboard, and after about eight to 10 minutes they try again. This time the song stays in tune, beautifully flowing, but there’s still another six minutes of work on the piece in which the music achieves further musicality before the quartet and their coach is satisfied.

“Barbershop is more of a finesse with only four parts,” said Brandon Parks, bass “You can’t mess up. There’s a lot more room for error in a choir and we have a lot more small things that help the music.”

The quartet members have all been involved in the Washburn choir under the leadership of Kevin Kellim.

Fenema and Freed also perform in Singers on campus, and the barbershop style, despite its relative novelty, has sometimes been hard to break.

When preparing for the fall concert, members of Singers had been rehearsing a song called “Ollie Brown,” built upon the spiritual style of the slaves.

“There’s the last chord where we sing ‘Lord’ and Dr. Kellim asked us for a barbershop chord and I knew what was going to happen,” said Fenema. “I saw it coming, but I couldn’t stop it.”

A barbershop chord provides a full ringing sound and produces overtone, notes that are heard but not actually sung. However, barbershop vowels are true vowels, whereas in choirs the vowels are often sang differently to make them match. The word “Lord” in choir would be pronounce “laud.” In barbershop style, it would be sung with an “er” sound.

The atmosphere between the two environments is also quite a bit different.

“This is also much more relaxed than our rehearsal with Dr. Kellim,” said Fenema.

The quartet began last year and was called the Vaudeville Volunteers. Under that name, the group performed at Old Navy in West Ridge Mall for a Christmas concert, at Washburn University’s annual Cabaret and at the regional barbershop competition.

“We didn’t do so well when we performed at competition, but the judges go over pieces with the contestants afterward and when they hear us, they were really surprised,” said Woolery. “They said that if we’d sang that like we did in the practice rooms we would have won hands down.”

Strike Four had also performed outside their hotel at competition.

“They drew a really good crowd, better than some of the big dogs that were there,” said Kready.

The competition is in April each year, and the barbershoppers have already started working on their two-song package to perform. They are also working on package songs for any gigs they acquire in the mean time.

The quartet has even sung for a city management meeting in Olathe, where Woolery and Parks hail from.

And though the Topeka barbershop scene is a tight-knit group, Freed said that Strike Four is making its way into it. However, one of the few blows has been the Washburn music department. Kirt Saville, department chair, won’t allow them to form an organization on campus.

“They said the reason was they didn’t have enough members,” said Kready. “I guess they wanted a four person quartet to be larger.”

Still, the quartet has tried to work around the four-person quota that a quartet entails and has tried to start an organization for a barbershop chorus, which could host many more people.

“We had 12 signatures from people who were interested in it,” said Fenema. “But we were still turned down.”

Members of Strike Four did note Kellim had allowed them to sing at Cabaret last year and they have seen some support from him, as well as enthusiasm from other music professors.

Lack of organization hasn’t hurt the quartet much, aside from perhaps its morale. Through connections with the coach, friends and family, its members have gotten gigs without really having to look for them.

The members of Strike Four seem to really enjoy what they do and really seem to have a talent for barbershop, in much part thanks to Kready, said Freed.

“You know, it’s really just those four voices who are out there on their lonesome,” said Kready. “If they do it well, it sounds like the whole orchestra is going.”