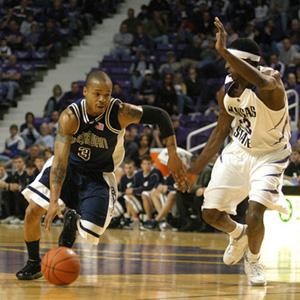 “The KU game was a pretty good one to get us ready for this one,” said Bob Chipman, Washburn head basketball coach. “It’s a tough situation for them, it’s their coaches first outing and their expected to beat up on us.”

Led by Paul Byers, Washburn sophomore forward, the Ichabods jumped out to a 13-8 lead and maintained a 33-26 margin at halftime. The Ichabods shot 43 percent from the floor in the first half while holding the Wildcats to 29 percent and out rebounding them 23-18.

The Ichabods suffered a major blow in the second half when Frank Phifer, senior forward, and Washburn’s primary post presence, fouled out with 8:16 remaining and the Ichabods clinging to a 58-56 lead.

“We didn’t really panic that much, but I felt bad for Frank,” said Chipman. “They did a great job of getting people around him, double teaming him and playing him different all the time. I think they were surprised that when he fouled out we had some other guys who could score in the post.”

The Wildcats regained the lead 63-62 at the five minute mark, and extended the lead to 65-62 after Cartier Martin, Kansas State senior forward, hit a 15-foot jump shot. The Ichabods then went on a 5-0 run capped by junior guard Andrew Meile’s 3-pointer with 2:10 remaining. Washburn led 68-67 with 50 seconds remaining in the game when David Hoskins, Kansas State senior guard, was fouled, hitting one of two free throws to tie the score 68-68. Each team had a chance to win as time wound down but could not capitalize, and the game went into overtime.

Dylan Channel, Washburn junior forward, hit one of two free throws with 3:45 remaining tying the score at 71-71. Channel then made a layup with three minutes to go to put the Ichabods up 73-71. Clint Stewart, Kansas State junior guard, hit a 3-pointer to put the Wildcats up 74-73, Martin then stretched the lead to three after hitting a jump shot. With 40 seconds remaining, Byers hit a key 3-pointer to tie the score 76-76. Clint Stewart, Wildcat guard, turned the ball over as he tried to play for the last shot. The Ichabods called a time-out with 10 seconds remaining. Michael Williams, Washburn senior guard, brought the ball up court and front rimmed a fade away jump shot as time expired.

Luis Colon, Kansas State freshman forward, made a lay-up to open the second overtime, After a Stewart free throw, Williams hit a 3-pointer to tie the score at 79. After K-State regained the lead, Williams hit another 3-pointer to put Washburn up 82-81. The Wildcats then went on a 4-0 run to take an 85-82 lead with less than one minute remaining. Williams then hit his third 3-pointer of the overtime to tie the score 85-85 with 43.5 seconds remaining. The Ichabods forced a jump ball and regained possession with .18 seconds remaining. With time winding down, Meile missed a wide open 12-foot jump shot.

“I’m kind of streaky,” said Williams. “After I hit the first 3-pointer my confidence shot up, and then the second and third one. I wasn’t even thinking about it at that point, I was just letting it go.”

The Ichabods play next at 7 p.m. Wednesday, Nov. 15, at Lee Arena against Kansas Wesleyan. After that, the Ichabod will travel to Portales, N.M., to play two games in the Eastern New Mexico Tournament Nov. 17-18.