Soccer season ends in second round of NCAA tournament 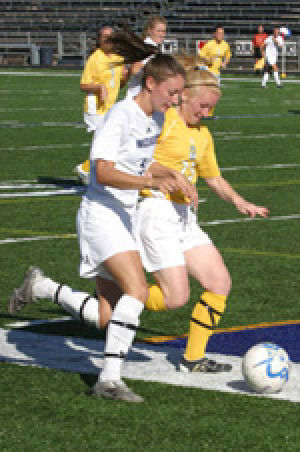 The Lady Blues soccer team lived by the penalty kick Friday and died by it Sunday.

In No. 10 ranked Washburn’s first bid to the NCAA Division II tournament, they were eliminated during Sunday’s second round on penalty kicks 3-1 against No. 1 defending Division II national champion University of Nebraska-Omaha. The two teams battled to a 2-2 tie in 90 minutes of regulation and two 10 minute overtimes.

Washburn got to the second round of the NCAA Division II tournament to play the Mavericks with a 4-2 penalty kick win Friday against Missouri Southern State after playing to a 1-1 tie.

One day the ball bounced Washburn’s way with penalty kicks, the next it didn’t.

“We have nothing to be ashamed of,” said Tim Collins, Washburn head soccer coach. “We left a lot of ourselves on the field.”

Washburn, 15-1-6, drew first blood with a goal in the 23rd minute by Jessica Mainz, sophomore forward. The Mavericks, 19-0-2, answered back eight minutes later when their career-leading scorer Beth McGill put one past Jenna Hatlestad, Washburn goalkeeper.

The Lady Blues returned the favor in the 70th minute when Jolene Silovsky scored her ninth goal of the season, good for second on the team. Mainz assisted on the play.

“One of [the Mavericks’] weaknesses is that they play with so few defenders that they leave gaps open and we were able to capitalize on that with our two goals,” said Collins.

With 58 ticks left on the clock, McGill struck again for the Mavericks knocking in a rebounded shot off the post to send the game into overtime.

“We weren’t making mistakes,” said Lisa Fahey, sophomore Lady Blue midfielder. “It’s not like we gave the game away.”

In the shootout, Mainz was stopped while McGill scored for the Mavericks in the first round. Meagan Horvath was next for Washburn and scored but was matched by the Mavericks’ Branie Beale. Fahey was next for the Lady Blues and her shot was high. Hatlestad followed that up with a stop to keep the penalty kick score at 2-1 in favor of the Mavericks. However, Jenna Lawless couldn’t capitalize on her shot in the fourth round, and the Maverick’s Tara Wegehaupt then stepped up and iced it for her team, scoring to make it 3-1.

Washburn’s season may have ended on that shot, but the resounding effects of a record breaking season in which the Lady Blues became the first team other than Truman State to win the MIAA conference title live on.

“It definitely helps get our name out there,” said Fahey. “For us, we’re the team that nobody knows about.”

The Lady Blues set team records for conference wins, home wins and overall wins in a season, aided by going without a loss in their first 12 games of the year.

“It was a great year. We went farther than anyone thought we could go,” said Hooker. “It was a great season and I don’t regret anything. We can take this year and put it into next year and build on it.”