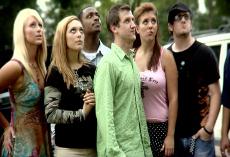 Although the movie was greeted with eruptions of cheering, a very annoying distraction during the film, I must assume that those cheering were directly related the people involved with the film.

First, I must admit that while the movie will not keep audiences on the edge of their seats in anticipation, it is a vast improvement over any other independent horror film I’ve seen.

The special effects are better; the film quality is superb although the sound quality was dismal for whatever reason. The acting is better than most low budget indie flicks, except those that usher in Hollywood actors.

Still, the piece is very green, very hurried in its feel. This could be because of the $2000 budget for the movie and the 11 consecutive days it was shot during – a very large undertaking.

I am willing to grant the actors slack on their performances. It was the first movie for most of them and they have lives outside of the very consuming production days. Most of the actors played their parts well enough. However, the screen was completely stolen by the Carbondale extra, who provided the only comic relief.

The script, however, is unforgivable. As much as I cringe while writing these words, it is necessary to produce a script that is interesting and not clichÃ©-laden, a piece with original jokes and horror. It is necessary to make the characters exist in the mind of the viewer, more than just on screen for a bit. The script is what truly makes a movie; no amount of acting can make a bad story good.

The story seems to have fallen prey to too many clichÃ©s, predictable events and actions that don’t quite make sense. For instance, why does everyone run away when someone dies? I realize a person would be scared watching people struggling to protect their life against an invisible attacker, but even the Scooby Doo gang would have stopped to help someone, even if the motive was a Scooby snack.

“The Key,” however is an important movie for Topeka. It represents the beginning of a film industry here and this movie could help create some competition for the next project done here. For the Topeka film industry, there’s nowhere to go but up.