Student camps out in library to make point 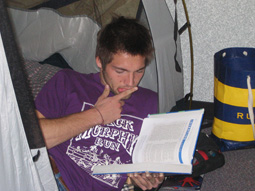 Kyle Brown studies in his tent

Staying open 24 hours a day during finals week is suppose to be an experiment for Mabee Library. But Kyle Brown, a senior finance major, is using it to also make a point.

Brown, who is taking 18 hours this semester with five finals this week, has decided to campout in the library. He moved in about 11 p.m. Sunday – tent and all – and has continued to stay under the west staircase throughout the past couple of days.

On Monday morning, he was met with his first opposition from library staff.

“[A staff member] told me ‘this isn’t a homeless shelter,'” said Brown.

However, after consulting the library staff the decision to let Brown stay was made.

Judy Druse, the acting assistant director for public services, said she thinks Brown camping out and the amount of people that have shown up to the Mabee Up All Night event has been great.

“From my perspective, it’s just been wonderful,” said Druse. “We’ve been keeping track of everything – the number of people in here every hour, how long it takes for the food to go, and any incidents.”

Brown said he is doing it because he needs the extra time to study.

“I commute 20 minutes both ways every day,” said Brown. “I wanted to use the time I would spend to commute and interact with my family to study, so I decided to move in.”

Brown said he was ecstatic at the idea of the library being open 24 hours and wanted to prove to them that students want to be there.

“I believe in the idea of being organic and really absorbing the library – absorbing the energy of everyone being studious,” said Brown.

Brown said he has gotten a lot of reaction from the library staff and the students.

“A lot of students will come up to me and want to see in [my tent], even though I do have a ‘no trespassing’ sign,” joked Brown.

One concern that the library is keeping track of is the number of incidents that occur when the library is open this week. If someone reports something missing or there is any kind of harassment, it will be recorded. There haven’t been any incident reports filed yet.

However, Brown said he isn’t worried about stuff being stolen.

“I really trust people and people at Washburn,” said Brown.

Druse said based on the average number of headcounts every hour, they still have a few dozen people there until about 4 a.m., and then numbers start to drop off. The best time has been late evening and early morning, where there have been over 100 students.

They are keeping track of these numbers so they can have a plan for future library hours.

“One of the things we are going to have to do is justify to the administration the amount of money going into this, especially if the numbers drop between 4 a.m. and 6 a.m.,” said Druse.

Mabee Library decided to stay open around the clock during finals week when they were asked to do so by the Washburn Student Government Association, who is also providing free food and drinks. They will use the feedback they receive this week to formulate a plan on what needs to be done next semester.