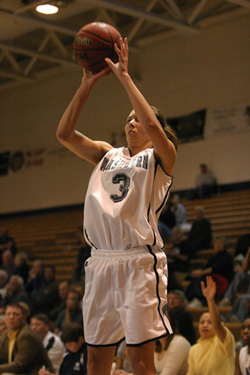 Finals maybe over and the winter semester may have just begun for the students of Washburn University, but the Lady Blues were hard at work Saturday night.

Even though the score would make one believe that this was far from the truth. The No. 5 nationally ranked Lady Blues were in action Saturday night against Lincoln University.

The Lady Blues were on fire from three-point land shooting 50 percent from behind the arch. Led by senior Cindy Keeley, the Lady Blues set a new school record of 15 three- pointers in a single game. Breaking the old record of 14 three-pointers set back in January 2004. Seniors Cindy Keeley, Megan Sullivan, Holly Henrichs and Brooke Ubelaker won their 100th game in their careers at Washburn.

Washburn began the game strong, taking a 14-4 lead and never looked back. The Lady Blues took the game into the half leading 32-16. The second half was no different. Washburn held Lincoln to zero points for the first 6:09 of the second half. Eventually the Lady Blues increased their lead to 52 points and would end the game with that margin.

Getting back on track from their loss one week ago, the Lady Blues convincingly won 81-29 over the Blue Tigers from Lincoln. Washburn returns to action at the Hoop-N-Surf Classic in Honolulu, Ha. on Dec. 19 against Northwood at midnight CST and on Dec. 20 against No. 6 Glenville State at 10 p.m. CST.