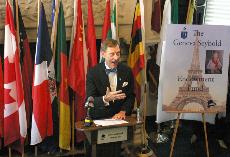 While Washburn celebrated International Education last week, they also celebrated a $1 million gift to support it.

Geneva Seybold, who graduated in 1921 from Washburn College, died in 2004 but left a provision in her will to give endowed scholarships for students participating in the international studies program.

Seybold traveled around the world after earning her master’s degree in journalism from Columbia University in New York. She wrote about her travels in her memoir, “A Waltzing Matilda,” which the Washburn Alumni Association published in 1994.

Jerry Farley, president of Washburn, made the announcement Wednesday afternoon at the International House.

“She led an extraordinary life, but it is what she put in place before she died that let that spirit live on at Washburn,” said Farley. “This will ensure that international education will stay forever at Washburn.”

Farley called the international programs a significant and important part of the culture at Washburn and stressed to the audience that philanthropy was an integral part of society.

“We want to give our students the world to learn from,” said Farley.

Details on how the scholarships are given out weren’t available yet, but Novica Lazarevska, a sophomore computer information sciences manager from Macedonia, said he has enjoyed the international programs immensely throughout the last few years.

“It’s a good school,” said Lazarevska, who is president of the International Club. “It’s big enough to get involved but small enough to get close to people.”

More than 130 international students attend Washburn, and more than 150 Washburn students are expected to travel abroad.

At Washburn, all degree-seeking students who entered college this fall are required to participate in the transformational experience, which requires either a creativity or scholarship activity, leadership, community service or international education study tract. The Seybold scholarships will make it possible for nearly 50 additional students to participate in the international education tract.