The real issues of Ed Navone 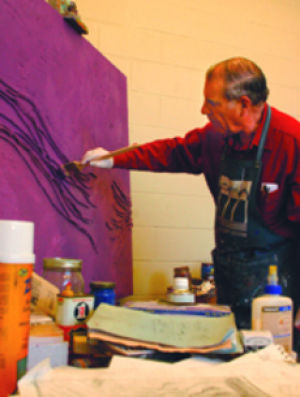 In Room 205, a studio inside the Washburn University Art Building, you will find an inspiring man painting in a blue, paint-splattered apron. He moves his brush dipped in purple paint across the canvas, creating a painting that is worth more than a thousand words.

Edward Navone, a Washburn University art professor, has been nominated as one of Topeka’s top 10 area artists. He has worked at Washburn University for 42 years and will be retiring at the end of this year. He has completed over 700 paintings and has received an Artist Fellowship Award from the Mid-America Artist’s Alliance/National Endowment for his series inspired by Dante’s Inferno. He currently has two paintings on display at the American Embassy in Athens, Greece. This summer Navone plans to travel to Ireland, where he has been invited for a second time, to give an exhibition.

Navone received his Bachelors of Art and Master’s from St. Jose State and studied art history for a year at the University of Berkley. He taught at Eastern Washington State College from 1962-1963, before coming to Washburn in 1964, where he was one of two art faculty members. Navone thinks teaching students is inspiring. He believes art clarifies ideas and opens up possibilities for the students’ imagination. He paints everyday because it gives his mind exercise and it prevents his skills from getting “rusty.”

“If you teach, you have to be working on the same material yourself; it’s setting an example for students. From my point of view, I can give more depth to cultural art because I am doing it too,” said Navone.

Besides painting, Navone enjoys classical music and opera. He is fluent in Italian and Spanish and loves to travel. Some of the different countries he has visited include Italy, Ireland, France and Belgium. Traveling to different countries not only allows him to experience different cultures, it also presents him the opportunity to give a first-hand account to his students the different works of art that he sees.

“I can talk about a certain piece of art in class and tell them what it is actually like to stand in front of it,” said Navone.

To Navone, there is always some compelling reason to look at art. He says art is liberating; it echoes different shapes and colors and is full of tension. He thinks through painting you should express what you have to say with integrity.

“Art has to be about real issues, otherwise it’s just a decoration,” said Navone.

One painting Navone completed was about just that: real issues.

“In Memorandum: Andrew Goodman, Mickey Schwerner, and James Earl Chaney,” is the first painting Navone completed at Washburn and is also the one he is most proud of. The history behind the painting deals with three college-aged civil rights workers from Philadelphia, Miss. who went missing, their bodies later discovered under a pile of dirt. It was determined that Goodman, Schwerner and Chaney were attacked by the Ku Klux Klan, shot to death and buried.

“The painting stands out as a special kind of triumph. I was just trying to create a painting and it got caught up in issues that I didn’t think about,” said Navone.