A little something to kill the pain 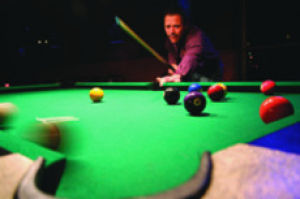 The swirled tables, blue and white to reflect the title of Van Gogh’s “Starry Night” painting, lie in wait for customers to congregate. Several are filled already with people sitting two by two, paired off for the night.

Their drinks sit before them, golden beers in pilsners hold their place as the majority beverage served at Painkillers, the new bar and the past Starry Night CafÃ©.

After the disappearance of the Starry Night CafÃ©, the same location rose again two weeks ago.

“This bar has created the environment we wanted from the beginning, but weren’t able to ever have when we were a coffee shop,” said Donna Lynn, one of the owners of Painkillers.

Lynn and several of the bar patrons described that environment as a “neighborhood bar,” a “family bar” and a “place like Cheers.”

Off to one side of the building is a place for musicians. Starting in February, performers will be playing every weekend night.

“You can come here and you can relax,” said Erica Martin-Porch, a Painkillers customer. “It’s not a meat market and you can actually hear someone.”

The coffee shop feeling seems to have crept into the bar and a few of the regulars have crossed over to the new venue, said Lynn. In the dimly lit building with spotlights at each table, there isn’t a lonely face in sight.

“Bar people are just good people,” said Lynn. “All these people here didn’t know each other, but they’re all talking.”

Indeed, the customers are friendly and talkative when approached and ready to introduce themselves as well.

Don Taylor, a Painkillers customer, is concerned about local business.

“Why does Washburn need a coffee shop? Is it that hard to walk to World Cup?” said Taylor. “That’s the kind of mentality that needs to be shaped to help local business.”

The sleeves of Taylor’s black shirt had been rolled up to his forearms and his one large shining earring glinted as he continued to discuss his concerns and hopes for Topeka, for its businesses and its university.

“It’s amazing how lovely these people are. They’re all so warm and friendly,” said Lynn. “We haven’t been open very long, but I already feel like I know everyone’s name.”

While the jukebox rocked out tunes and people played pool in the background, Bill Beatty, a Painkillers customer, talked up the new addition to 6th Ave.

He wore a Vietnam veteran hat and overalls. Beatty had tattoos on both of his forearms and a cigarette billowing smoke in his hand.

“We really want the younger kids here,” said Beatty. “They can relax and have fun, prop their feet up on the seats.”