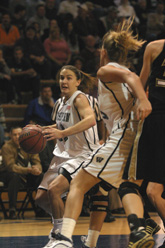 Senior Guard Jessica Aebi moves around a pick, set by Senior Megan Sullivan. Aebi scored all of her 10 points in the first half.

Some say that revenge is a dish best served cold, but for the Lady Blues it was bitter sweet. Wednesday night the No. 3 Lady Blues hosted the No. 4 Lady Hornets in the much anticipated rematch from last March.

Last March, the then No. 1 ranked Lady Blues hosted the then No. 8 Lady Hornets in the Women’s South Central Regional Championship game during the 2006 Women’s Division II National Tournament. The game went into overtime, with Emporia winning 61-59 and handing Washburn its first loss of the 2005-06 Season. Thwarting the Lady Blues’ chances of repeating as National Champions and ending a 51-game winning streak.

Washburn lead from the opening minute of the match and didn’t look back. During the first half, Senior forward Brooke Ubelaker hit an amazing buzzer beating, desperation shot from behind the 3-point line and banked the shot in. The Lady Blues held the Lady Hornets to only 2 points for the first 4:49 of the first half and lead by 11 points with 1:27 left in the half. At the half the Lady Blues lead 40-29.

On the other side of the ball, Emporia State Junior forward Michelle Stueve was held to only 2 points in the first half and a total of 10 points all game. Stueve lead the Lady Hornets in scoring and rebounds, nearly having a double-double. The closest the Lady Hornets came to taking the lead was getting to within 3 points at the seven minute of the second half.

The Lady Blues will be Back in action on Saturday when they host Northwest Missouri at 5:30 p.m. at Lee Arena. And finish up their three-game homestand against Fort Hays State on Jan. 10 at 5:30 p.m. and can be viewed on KTWU.