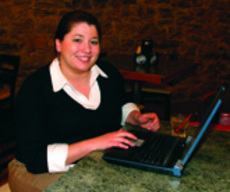 Seveneightfive Kerrice Mapes, editor and creator of Seveneightfive magazine works at her "office," anywhere that she can put her laptop. She usually lays everything out in her bedroom.

During the summer of 2006 a new venue for information about Topeka entertainment was born. It was a magazine called Seveneightfive reared from the imagination of Kerrice Mapes.

“Lawrence and Manhattan and all these other cities have magazines like this that tell people what’s going on and I started asking ‘Why don’t we?'” said Mapes.

Mapes is 25 years old and graduated from Washburn University in 2005 from the mass media department. She also played in the band.

“I think my background really made me interested in the things we cover in the magazine,” said Mapes. “I play and listen to music. I used to waitress. So I knew all these wonderful, talented people around town.”

The magazine covers music, businesses, art and anything else that Mapes feels Topekans would be interested in. With her brunette hair pulled back and a pale trench adorning her body, Mapes speaks about her passion for the growth of this town.

“We [Seveneightfive] are for locally owned businesses in town. You will never see an ad for Applebee’s,” she said. “It’s not that I’m against those places, but I don’t think smaller, local businesses always have a voice and we’re that voice for them.’

The local businesses were initially enthusiastic about the project, said Mapes.

The magazine has even dropped the subhead “proving Topeka nightlife is more than a vicious rumor” from its cover.

“Right now, I don’t think we’re proving it anymore. I think we have,” said Mapes.

“We always want people to show us what they’re doing,” said Mapes.

Mapes seems to have a great respect for everyone she works with. Her eyes grow a bit more somber and reflective when she talks about her team.

“This could not be done without all the creative and talented minds that help me,” said Mapes. “Right now everyone works for free, they don’t get paid $30 or $40 to do a story. Anyone can write well when they’re getting paid to do it, but these people do it because they really care about the community and where it’s going.”

The writers put a lot of information into the magazine about what’s going on in Topeka and where to look for it.

“For anyone looking for something to do, they should have this sitting on their coffee table,” said Mapes.