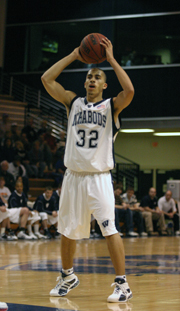 A 13-0 second-half run helped the Washburn men’s basketball team end a four-game conference losing streak, as they defeated the Missouri Western State Griffons 77-62 Saturday night in St. Joseph, Mo. The Ichabods now 7-12 overall and 3-7 in the MIAA, lost 68-57 earlier in the week to Missouri Southern State in Joplin, Mo.

“I can’t say enough about our guys, we’ve had so much disappointment this year,” said Bob Chipman, Ichabods’ head basketball coach. “We stepped up with the game on the line. Everybody contributed, Frank [Phifer] inside, Brady [Sisk] did a great job rebounding the ball, and Mike [Williams] was exceptional finding people down the stretch and getting them shots. Our guys deserve all the credit, and hopefully this game is something they can build on.”

Four minutes into the second half, Dylan Channel, Washburn junior forward, hit a pair of free throws to extend the Ichabods’ lead to 48-41. The Griffons wouldn’t go away as Joe Manthe, junior guard and former Washburn player, hit a 3-pointer to slice the Ichabods lead to 48-47.

Later in the half, the Griffons regained the lead 55-54 when Rickey Gurels, senior guard, hit a jump shot. Paul Byers, Washburn sophomore forward, scored on a layup to put the Ichabods back in front 56-55 with 7:50 to play. Byers’ layup was the turning point in the game, sparking a 13-0 Washburn run over the next four minutes taking a 67-55 lead. The Ichabods would cruise the rest of the way, winning 77-62.

“It’s a huge win for us, to snap the losing streak,” said Andrew Meile, Washburn junior guard. “We’ve seen everyone in the conference once, so to start the second half of the schedule with a win is big for us.”

Washburn shot a stellar 49 percent from the field for the game, as well as connecting on 10 of 23 3-point attempts. Washburn next plays at 7:30 p.m., Thursday, Feb. 1, at Lee Arena against Missouri Southern State.