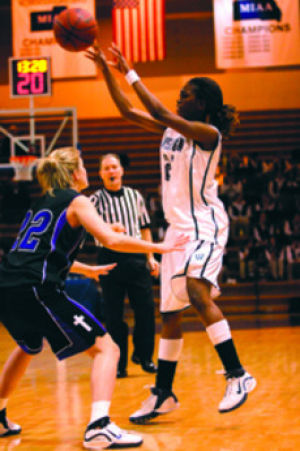 Taking it one game at a time may be one of the most over said cliché’s used by coaches and athletes. But this week taking the cliché seriously will be in the Lady Blues’ best interest.

It would be so easy to look ahead to Saturday’s match up with No. 3 Missouri Western, a team that already stole one from the Lady Blues at home. But it would be a mistake, because the Lady Blues will travel to Joplin, Mo. Wednesday, Jan. 24 to take on the Missouri Southern Lions, who are 8-2 at home this year.

“The Western game all depends on what you do Wednesday,” said Ron McHenry, head coach. “If you lose you really have your back against the wall. We are so far away from that game, I don’t think we’re good enough or anyone out there is good enough to look that far ahead. Southern is going to be all we want, there is no doubt about it, and with their good players and the way they have been playing they’re going to be a handful.”

The Lions’ only losses at home came to Fort Hays State and Montana-Billings, but no matter the year or Lions’ team, Missouri Southern always seems to give the Lady Blues trouble in Joplin. The remaining members of the 2005 National Champion Lady Blues may remember the Lions were one of two teams to hand them a loss that year.

“It has not been our easiest game of the year down there, ever,” said McHenry. “We’ve been beaten a couple times down there and it’s a tough little place to play.”

But playing on the road is something the Lady Blues will have to get use to quickly as seven of their next 10 games are away from Lee Arena. Cindy Keeley, senior guard, says winning on the road is just a matter of coming out and playing their game.

“It’s been a tough stretch for us already,” said Keeley. “But the second half of the season is going to be tough because we play on the road a lot. It’s always tough to play on the road. I think we did get our jobs done getting the wins at home except the one we slipped up on early. We just have to come out strong and try to play our game.”

Play the same game, which has allowed the Lady Blues to rack up an 11-game winning streak. With wins over Southwest Baptist 88-56 and Pittsburg State 84-55, this past week the Lady Blues improved their conference record to 7-1. The Lady Blues are one game behind the Missouri Western Griffons in the conference race who escaped Emporia State 63-53, Saturday.

“We have to play all the conference teams again,” said Amanda Holmes, junior forward. “We’re really going after Western, but we’re going to take one game at a time and see what happens.”

The No. 3 Griffons have steadily moved up in the national rankings since defeating the Lady Blues 68-76 on Dec. 9 when they were No. 24. But the Lady Blues are just worrying about their game, says Keeley.

“All of our games we really have to do our own job,” said Keeley. “We really just have to control ourselves and if we slip up, we’re going to let the season slip out of our hands. We’ve got to find a way in every single conference game to play our game and try to come out with a win.”