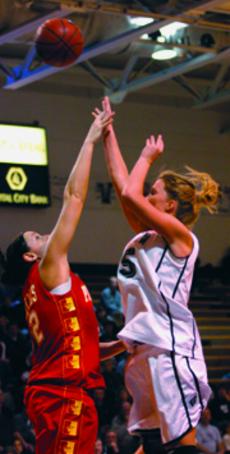 High jumper Megan Sullivan, senior forward, jumps above the Pittsburg defense. The Lady Blues defeated the Gorillas 84-55 in the Jan. 20 match-up. The Lady Blues travel to Pittsburg, Kan. Feb. 3 for a rematch.

In a game that wasn’t decided until the final seconds, the No. 3 Washburn Lady Blues basketball team failed to successfully avenge their lone loss of the season, as they were defeated 49-47 by the No. 2 Missouri Western State Griffons Saturday night in Joplin, Mo. The Griffons defeated the Lady Blues 76-68 last month in Lee Arena, snapping the Lady Blues 40 game home winning streak.

“Tonight was kind of one of those knock down, drag out games,” said Ron McHenry, Lady Blues head basketball coach. “The ball wasn’t going in quickly, neither team was scoring real fast and both teams were guarding each other pretty well. They made the big plays late and we didn’t. I liked our fight but sometimes just fighting’s not enough against a very good basketball team. It just wasn’t as clean of a game offensively as we wanted it to be, overall only making three of 24 3-pointers. I think our players know they can play with anybody out there, but just have to play a little cleaner.”

The Griffons jumped out to an early 18-11 lead after Ashleigh Curry, Missouri Western junior guard, hit a 3-point shot with 7:50 to play in the first half. Curry, a quick guard and one of the top players in the country, averaging 14.5 points per game, finished the game with 12 points and seven rebounds. Curry connected on another 3-point shot to put the Griffons in front 24-18 with 3:04 remaining before the half.

The Lady Blues then answered back with a 7-0 run to take a 25-24 lead, as Corkey Stiger, junior guard, found Brooke Ubelaker, senior forward, underneath the basket for a layup as time expired in the first half.

With 12:52 remaining in the game, the Lady Blues led 34-30, but the Griffons went on a 10-3 run as Curry hit a jump shot to give the Griffons a 40-37 lead. The Lady Blues last led at the 4:16 mark after Ubelaker converted a 3-point play to give Washburn a 46-44 lead. On the Griffons next offensive possession, Curry was fouled, hitting one of two free throws. Less than a minute later Curry converted a layup giving the Griffons a 47-46 lead. After two more free throws, the Griffons were up 49-46 when Cindy Keeley, Washburn senior guard, missed a 3-point attempt with 13 seconds to play. After a scramble for the ball, Megan Sullivan, Washburn senior forward, was fouled with 0:01 second remaining. Sullivan missed the first attempt, but made the second. The Lady Blues were unable to come up with a steal as the Griffons in-bounded the ball and time expired with Griffons narrowly escaping 49-47.

“We just couldn’t quite make the shots when we needed to and they did,” said Ubelaker. “We’ve won this conference the last four years, so we approach every game as a must win because it’s a goal of ours to come out on top. We’re going to make some minor adjustments but we’re not going to change our game plan, we’ve only lost two games this season and have a lot of good things going for us.”

“Obviously, we’d like to have some free throws back, but that’s part of the game,” said McHenry. “We just kind of got on one of those runs where we missed a lot of them.”