In a Tough MIAA Test, the Ichabods Fall Short 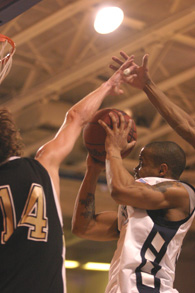 Senior Guard maneuvers through Emporia's defense for a clear shot.

The game began quick and fast for Emporia. Both teams tied early but then Emporia gained the advantage and went on an 8-0 run against the Ichabods. But the first half ended with an Ichabod 11-0 run in the last five minutes. That run took the Ichabods into the lead going into halftime 36-34 off a Paul Byers 3-pointer.

The second half began much like the first, quick and fast for the Hornets. Emporia took back the lead and went up on the Ichabods by 13 points. The Hornets seemingly had control of the game, but like in the first half they began to slow and the Ichabods went on a scoring run, 15-4. The Ichabods pulled to within 2 points of the Hornets from a Michael Williams 3-pointer with 11.3 seconds left on the game clock and the score at 77-75. Emporia’s Andrew Davison was fouled with 10 seconds on the clock and went 2-2 from the free-throw line, pushing the lead to 79-75 for ESU. Washburn’s Andrew Meile hit a layup with 2.6 seconds left and cutting the lead to 79-77, but Adam Head was forced to foul Emporia’s Donta Watson and place him at the free-throw line. Watson hit 1-2 free-throws and made it a three point game. The Ichabods had one final chance at tying the game, but Reed Hein’s desperation halfcourt 3-point shot fell just shot. The game ended 80-77 for Emporia State.

The Ichabods will be back in action Saturday night against the Northwest Missouri Bearcats at 7:30 p.m. at Lee Arena. Then the Ichabods finish their three-game homestand against Fort Hays State on Jan. 10 at 7:30 at Lee Arena and will be live on KTWU.