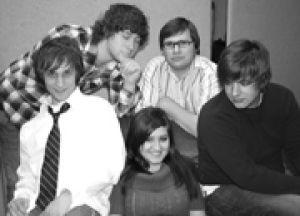 Beau Bruns, drummer for the prominent local band Kennedy Luck Club, is also a five year veteran of the Topeka live music scene. “The music taste and creativity fluctuates quite a bit here in Topeka,” says Bruns. “It keeps up with the times, but the talent is here. It’s definitely here.”

If the musical talent is readily available and the music styles are consistent with what’s popular, wherein lies the conundrum? According to Bruns, the problem is that while music goers will buy CDs and maintain contact via the Internet, live show attendance is at a relative standstill. With the limited number of venues catering to keeping the live music scene alive and active, repetitive playing at these places can become almost mundane. This is in no way the club’s fault, for they’re the one’s who keep the blood pumping throughout the veins of local live music. Rather, the dilemma stems from the lack of available settings where bands can actually play.

Another problem, says Bruns, is that the general attitude towards live music here is that people generally will stick with who and what they know, as opposed to attending shows just for the sake of seeing live music. As convenient as it is to stick with the crowd and music that you’re accustomed to, that sort of mentality is the antithesis of what a live music scene should be: musicians and listeners alike gathering together for their love of music. When you make attending local shows a social gala instead of a deep-rooted appreciation of music, you remove the fundamental element of what live music entails.

The root of these problems? “Once the government buildings close down,” says Bruns. “Downtown is a ghost town.” Bruns believes, as do many others, that a downtown revival is a necessary step to emboldening our live music scene (as well as many other industries). With the space downtown and the craving for local venues already available, the key factor is money. “This is our town,” says Bruns. “Why not try and make it the best it can be. Instead of investing money in something that sees a small return, people should be trying to make their own town a more enjoyable place to live.”

While large shows with big name bands have their own ambiance, live music, however, doesn’t necessarily have to be in a 2000+ seat venue with the latest in visualization technology. Hell, some of the best shows that I can recall off the top of my head were at venues no larger than our Washburn Review office. Shows where the person behind the microphone isn’t a big name celebrity, but doesn’t need to be in order to show heart and drive. Shows where the band is homegrown and familiar, yet so fresh and innovative it’s awe-inspiring to know they’re from right around the corner. Local music embodies everything music should be. Letting it fade into obscurity is an injustice and disservice to anyone who considers themselves a music fan.