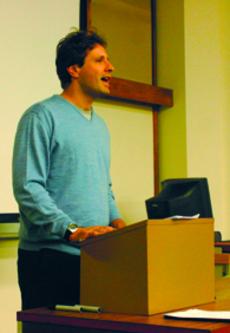 Toto, I have a feeling... Paul Harris, U.S. foreign correspondent for The Observer, discusses Kansas and how it is viewed by the rest of the country and the rest of the world.

What’s the matter with the state that has a female, democratic governor and a conservative republican senator throwing his hat in the ring for the presidency? Nothing, according to Paul Harris, the U.S. correspondent for The Observer, a liberal weekly British paper.

Harris spoke to a crowd on Friday, Jan. 26 about his foreign perspective on Kansas. His speech was to commemorate Kansas Day, which is being celebrated today, Jan. 29. This particular Kansas Day marks the 146 anniversary of statehood. Harris was invited after writing a column for his paper called “Ode to Kansas.” In the column, he dispels some of the stereotypes that seem to plague most Kansans when they travel outside of the state. During his speech, he discussed this in more detail.

“There seems to be this folksy, mythical image of goodness,” said Harris. “The past of America that never really was.”

Harris has traveled to Kansas on occasion for stories; for example, he covered the BTK killer and wrote a piece about depopulation in small towns. Harris said his friends and colleagues would react negatively when he would return from his trips. In response to this, Harris wrote “Ode to Kansas,” from which, he said, he received the most feedback than any other piece of work. He then went on to explain that, from all of his travels, he has found out that everyone is the same on a fundamental level. Kansas really is not as alien as non-Kansans think.

“Foreigners don’t really understand Kansas or the Midwest,” said Harris. “They often don’t understand the United States as a whole.”

Harris went on to describe the European “snobbery” that sometimes accompanies the stereotypes. He also explained there are stereotypes that surround foreigners, specifically, the British. He said not all Britons care about the queen or play Cricket.

“I can’t stand the queen,” said Harris. “I genuinely thing we should get rid of [the monarchs].”

Harris said that the world’s view of America would probably change, just as the view of the British has changed. Harris described Britain’s fall from colonial super-power as “going from being a bulldog to a poodle.”

Harris said his visit to Washburn was a pleasant one.

“Everyone has been extremely friendly,” said Harris. “I’ve been very impressed with the broad range of people, students and faculty. It illustrates that Kansas isn’t monolithic.”