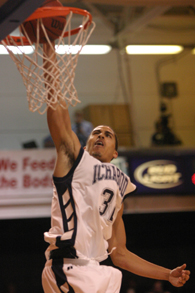 Junior guard Grant Hargett dunks the ball off of a steal and fast break.

The first half started out as a back and forth scoring battle, but then the Ichabods took control and went on a 12-2 scoring run. The Ichabods defense was tough during the first half, holding the Tigers to only 16 points. The half ended with the Ichabods up 33-16 over the Tigers.

As the second half got underway, both teams came out strong and forced a faster pace against one anothers’ games. Junior guard Grant Hargett forced two turnovers against the Tigers and slammed the ball into the basket off of a fast break. The Tigers didn’t back down though, but it wasn’t enough as the Ichabods denied the Tigers there first victory in the MIAA, 69-57.

With Seniors Michael Williams and Frank Phifer out of the starting line-up Wednesday night, Juniors Andrew Meile and Grant Hargett stepped up and brought there A games. Meile lead the team in scoring with 14 points. While Hargett scored 12 points and recorded 8 rebounds. Even though Frank Phifer did not start the game, he still had an impact against Fort Hays State by providing 11 points and 8 rebounds.

The Ichabods return to action this Saturday against the Truman Bulldogs. Tip-off begins at 3:30 p.m. The Ichabods return home next week. On Wednesday night, January 17 against Southwest Baptist at 7:30 at Lee Arena. Then on Saturday, January 20 they go up against Pittsburgh State, tip-off is at 7:30 p.m. at Lee Arena and can be viewed live on KTWU.