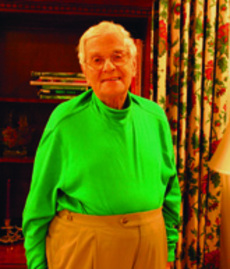 To make new friends, Irving Sheffel may have the best advice in the world – become a volunteer in community theater. It’s cheap. It can be very rewarding. It’s instant gratification in the time it takes to give of your time.

“It’s a wonderful way for a person to meet people,” said Sheffel while sitting on a loveseat in the lobby of Brewster Place, a local retirement center and his home for over 15 years. “You immediately become part of that theater family.”

He should know. While not an active volunteer himself, Sheffel has been regularly attending Topeka Civic Theatre and Academy productions since moving here from Washington D.C. in 1949. He has seen those involved in TCTA, mostly consisting of volunteers, grow and develop into quite a close-knit family. He has become a part of that family by not only literally following it all over town, Sheffel can tell you of early productions he’s seen in high school auditoriums and even in front of stores, but by giving the family what it needed most – a home.

“I was the largest donor. My contribution made it possible for them to build the theatre they built in 1999,” said Sheffel. “At that point they were worried about raising the money so I increased the contribution I was originally going to give significantly. This got other [contributors] to do the same and they were able to raise about $5 million.”

The outcome was a nice new theater, its main stage named the Sheffel Theatre, at a former elementary school on 8th Avenue. Sheffel’s portrait was hung in a prominent location on the wall.

Sheffel is not only affectionately known among the theater crowd as the ” man who writes the checks,” however, even though his various donations have included the Sheffel Theatre Clinic (once again named after him) and the Washburn Theater department. His life story is a rather extraordinary one. He held various high-ranking positions in the United States Army during World War II. He holds a masters in public administration from Harvard University. At the age of 90, he still travels at least once a year to places like Japan and Europe. He was an executive assistant to Karl Menninger, cofounder of the notorious Topeka-based Menninger Foundation and Clinic.

Of Menninger, Sheffel is bluntly honest.

“I spent every morning with him,” remembers Sheffel. “He was unpredictable, emotional. He could be real rough on some of the residents.”

Sheffel has also lost much in his life, most notably his wife of 53 years to breast cancer and his daughter at the age of 21. The lines in his face and the slight hunch of his back might tell these stories, but his engagement with those around him and his friendly, outgoing demeanor tell a different story. As he looked out at the grandiose lobby of his retirement home he spoke about how, while there had been some tragedy in his life, there was much he had learned from it. Sheffel is clearly a man who has little or no regret. He is a man who is content with what he has achieved and may still achieve in the future. He is a man who can sit down for a little conversation and say simply, “This is a nice place. A very nice retirement center.”