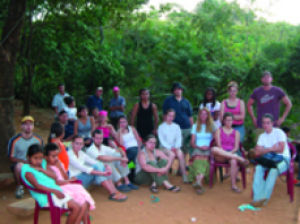 A group of Washburn students flew south for the winter. They went to Nicaragua over the winter break to do community service in various parts of the country.

In a meeting after the trip on Jan. 27, Rick Ellis, the faculty sponsor, called the trip a powerful experience.

“I don’t know if you know how much you changed people’s lives,” said Ellis to the students who went on the trip.

One of the places the students assisted was La Chureca, where a large part of the population lives in a waste dump. The people who reside there scavenge for raw materials to survive. The students told a story of a boy who was recently hit by a garbage truck and had exposed pins to hold his broken leg in place. The students were surprised to find he still wanted to play soccer with the other children. Ellis also described the children huffing glue, so they would feel less hungry and being watchful of the mountains of trash that were constantly burning. In El Cacao, the Washburn delegation dug trenches to help bring water closer to the community. Some of the residents had to go more than a half mile for water before the project. The students stayed with families in the community and at the end of the project, a celebration was held in their honor.

Along with community service, the students were able to see some of the landmarks. Among the places they visited was the Linder House. The Linder House is in memorial of Ben Linder, an American student who went to Nicaragua to support the Sandinista Revolution. The contra killed him at point-blank range.