No flinching to be found in ‘Notes’ 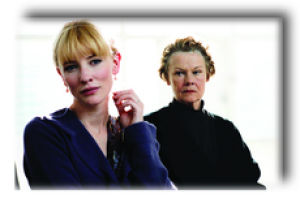 “Notes on a Scandal” features a remarkable cast with Judi Dench and Cate Blanchett leading the herd. The film is fast paced, emotional and full of underlying tension between the characters and between the audience and the film’s exploration on naughty themes.

The cast is fully immersed in their characters. There is never a break where it becomes obvious to the audience that this is a movie. The material is thought provoking and uncomfortable at times, but nevertheless, it is real and raw.

“Notes” manages to take the teacher-student sex scandal past the magazine headlines. It turns both the teacher and the student into real, three-dimensional people who are likeable and normal. It offers an intellectual and intriguing look at the situation.

However, Dench completely dominates the movie with her character, Covett. She portrays a woman obsessed with her own convoluted intellect and the easy, friendly beauty Sheba Hart played by Blanchett.

Overwhelmed by her affection for Hart, she finds her way to control her – by keeping her secret away from the school board and the parents so long as Hart breaks off the affair.

The struggle of a young woman feeling weighed down by the responsibility of being married to a much older man and having two children, one developmentally slow, is further exacerbated by having to let go of the one freedom she’s found. Albeit an illegal, immoral freedom, Hart nonetheless shows the audience her difficulty to break away from an adolescent boy.

Creepy and yet, somehow understandable, the darkness in this movie is not from that situation. It comes from Covett’s eery journal entries, the where she expresses thoughts that are hurtful and still show an attachment. The darkness expels from Covett’s wandering gazes and immediate affections for anyone who apparently has coffee foam on their noses.

It’s an intellectual movie with a sinisterness akin to older movies like “Diabolique,” “Lolita” or “The Children’s Hour.” There’s always an underlying feeling of something that according to popular opinion is off limits for normal conversation.

Still, I must admit this film disappointed me a bit. Had I not heard any of the hype or reviews, I would have been fully satisfied, but it was built up and I expected scenes that would cause me to flinch. This was not the case.