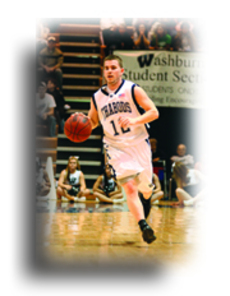 Reed Hein, junior guard, drives the ball down the court in Saturday's game against Truman in Lee Arena.

The losing streak is now officially over. Needing a win in a big way, the Washburn men’s basketball team defeated the Truman State Bulldogs 68-58 in overtime last Saturday at Lee Arena. The Ichabods are now 8-15 overall, and 4-10 in the MIAA. Frank Phifer, Washburn senior forward, turned in his biggest game of the year with 24 points and 14 rebounds, to help Washburn snap a three game conference losing streak.

“Basically today I just wanted to come out and play hard and to the best of my ability,” said Phifer. “We’ve been on a losing streak so I wanted to step up tonight to get us going, so I took that challenge and by me playing hard, it helped get us a victory.”

The Ichabods trailed 14-6, but went on a 12-0 run to take an 18-14 lead with 6:17 remaining in the first half. Washburn led 29-24 at halftime. The Bulldogs opened up the second half with a 15-3 run to go out in front 39-32 with 12:05 remaining. The Ichabods trailed 53-52 with 48 seconds remaining when Washburn junior guard Grant Hargett hit a 3-pointer to put the Ichabods up by two. Austin Kirby, Truman State senior guard hit a jump shot from the baseline with 32 seconds to tie the game 55-55. Washburn had the final possession, but senior guard Michael Williams missed a jumper and time expired.

The Ichabods routed Truman State in overtime, outscoring them 13-3 to win by 10 points. The Ichabods shot only 42 percent from the field, but were able to hit clutch shots down the stretch and in overtime. The Ichabods’ next three games are on the road, but they return to Lee Arena for their final regular season game against Central Missouri State at 7:30 p.m., Saturday Feb. 24. The Ichabods most likely need to win at least three out of their final four games to have a realistic chance of playing in the MIAA post season tournament.

“I’ve been around basketball teams that have had an outstanding season going, but lose one game and then they’re crushed for two weeks,” said Bob Chipman, Washburn head basketball coach. “Our guys have been through a lot with all the close games and disappointment throughout the season, but they were able to erase that and step up. Our offensive performance tonight wasn’t a thing of beauty, the shooters weren’t on fire and we couldn’t buy one from the perimeter, but we were able to run what we talked about running in practice. Defensively, that’s as hard as we have played all year. Our zone defense in the first half was a key for us tonight.”