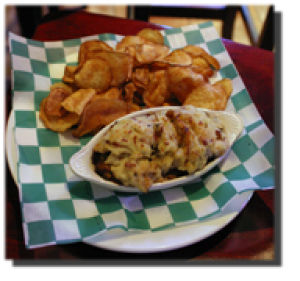 Start your St. Patrick’s Day off right with an Irish Breakfast, one of the more appealing, mouth-watering dishes the country has to offer. After all, how wrong can you go with bacon, the only food Jeffrey Steingarten, critic and Iron Chef judge, has called better than chocolate?

For two people, the required ingredients are six bacon strips, two tablespoons of butter, four eggs, two small tomatoes, two cups of whole mushrooms and four slices of soda bread. A recipe for soda bread will also be appearing in this article.

Fry the bacon on both sides. The traditional recipe calls for the meat to only be slightly browned on the sides, but crispier strips give the dish more texture. When removing the bacon from the pan, be sure to leave the grease.

Next, put the butter in the skillet and allow it to melt. Add the eggs, without breaking the yolks. You’ll want them runny.

Slice the tomatoes and place them, along with the mushrooms and bread in the pan, but keep the bread, veggies and especially the eggs all separate. If you don’t have a huge skillet, then feel free to use more than one, but the bacon grease will need to be placed in all the skillets used.

Occasionally stir the vegetables while frying the ingredients. Brown the bread on both sides. A toaster can be used, but it won’t offer near the control of cooking it over the stovetop.

Once the whites of the eggs are firm, you’re done cooking. Divide the ingredients and serve.

While the food can still be kept separate, some like to place the bread first, layer on the bacon strips and then the eggs and veggies.

However, this meal needs Irish soda bread, which is also delicious by itself and easy to prepare. The necessary ingredients for the traditional bread are three cups of all-purpose flour, one tablespoon baking powder, one-third cup white sugar, one teaspoon salt, one teaspoon baking soda, one lightly beaten egg, two cups buttermilk (or slightly soured milk) and one-fourth cup melted butter.

Turn the oven to 325 degrees and grease, spray or butter a 9 -by- 5 bread loaf pan. Mix together the dry ingredients in a large bowl and the egg and buttermilk in a smaller bowl. Then, add the two together and mix until moistened. Add the butter and blend all ingredients before placing in the loaf pan.

Bake the soda bread for 65 minutes.

The massive amount of food feeds six people. First spray or butter a three-quart baking dish and preheat the oven to 325. In a bowl, whisk the eggs and milk together. Then in the baking dish layer all the ingredients in the order listed. Pour the egg mixture on top and bake for 55 minutes covered. After 55 minutes, uncover and bake for 10 minutes longer.

For desert or a snack, try Irish bananas. To create this dish you need a half cup butter, a half cup light brown sugar, a half cup Irish whiskey and four large bananas.

Peel bananas and split in half across the length of the fruit. Meanwhile, melt the butter in a skillet and then add the sugar and whiskey. Stir until mixed and bring the skillet to a boil until the sugar has dissolved. Turn the flame to simmer and add the bananas. When the fruit is tender, the dish is ready to be served. Irish bananas should be served hot and topped with ice cream.