Baseball season set to get underway 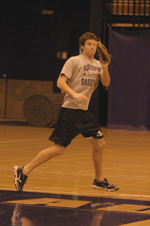 Preparing for Sunday Reed Howard, freshman redshirt outfielder, practices in Lee Arena due to the cold weather and wet ground.

After falling just short of qualifying for last years’ regional tournament, the Washburn baseball team looks to improve on last season’s 29-25 overall record. The Ichabods placed fourth in the MIAA and qualified for postseason play for the first time since 2001.

“The goal we have going into the season is to get into regional play,” said Steve Anson, Washburn head baseball coach. “A year ago we missed it by one spot. We lost a lot of close ball games early in the year that wound up hurting us down the road. In order to make the regional tournament, we have to get back to the conference tournament which goes hand in hand with the regional tournament.”

“We have a big challenge in front of us this year because I think the conference is going to be more balanced than it has been in the last few years and more challenging. Fort Hays is traditionally a top 25 team, so by throwing them into the mix, the level of competition has jumped up tremendously,” said Anson. “There’s a lot of things that can happen during the course of the season, we’ve changed the format of our scheduling which will enable us to match up our top pitchers more often with the opponents’ top pitchers, which I think will make for a more interesting race this year.”

Last season Washburn finished seventh in the regional poll, but needed to place in the top six to qualify for the regional tournament. The Ichabods lost eight games by one run last season.

Washburn brought in nine new recruits for this season, including four pitchers. The most heralded of Washburn’s recruits is Danny Cook, a 6-foot-4 pitcher and infielder. Cook graduated from St. Thomas Aquinas High School in 2006, and led his team in with a .411 batting average and was also one of the top pitchers on the team with a 2.88 earned run average.

“I think we need to come out and establish a good pitching game,” said Randy Wild, Washburn senior pitcher. “We have a lot of young guys we’re going to try to fit into our rotation because we lost a lot from last year. There are some question marks right now this early in determining which players are going to be starting pitchers, and who’s going to fill roles in the bullpen. I think we’re going to be able to do a good job this year with the core guys we have. It will help once we get outside and start to get a better look at people, but I’m pretty excited to get the season started. We have some young talent and new guys we brought in that I think will work out pretty well for us.”