Chipman suspended for one game by MIAA 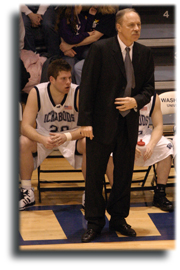 Head coach Bob Chipman helped Washburn basketball become solidified as one of the premier men's basketball programs in the MIAA during the past decade.

Tuesday, Feb. 20 Bob Chipman, Washburn head men’s basketball coach, was handed a one-game suspension by MIAA commissioner Ralph McFillen for making contact with a referee during Washburn’s 88-74 loss to Emporia State University. Chipman was not allowed to coach last Wednesday night when the Ichabods traveled to play Fort Hays State, losing 58-57. Chipman may have worsened the situation when he was cited for making comments to the media after the game criticizing the officiating.

“It was incidental contact but it’s still unfortunate that the incident took place,” said Chipman. “I can’t tell you how much it hurt for me not to be coaching a Washburn game. I’ve learned from this and my team is going to move forward from here.”

Chipman said he was attempting to get an explanation from an official about Phifer’s technical, because he didn’t see what transpired during the play in question. Referee Bill Westbrooks assessed Chipman with a technical foul after arguing for too long. Chipman then approached Westbrook, which is when the contact took place. However, Chipman was not called for a second technical for the contact, which would have ejected him from the game.

“From what I saw after reviewing the video of the incident, and the official’s reaction of not calling a technical after the contact was made, I didn’t think it warranted a suspension on our part,” said Loren Ferre, Washburn athletic director. “The commissioner’s been consistent that when contact with an official is made, it’s a one-game suspension.”

After the technical, Chipman confronted McFillen, who was sitting at the scorers table. Chipman then threw his coat and tie into the Washburn fans’ section. McFillen said the lack of a second technical foul being called was not going to keep him from handing the one-game suspension to Chipman. McFillen said that type of bump would normally warrant an ejection from a game.

“Coach Chipman is a competitor and, in that environment against Emporia State, emotions are running high and his emotions were obviously running high at that point,” said Ferre. “Coach Chipman has been a professional for a long time and handles himself appropriately, and we’ll move on from here.”