Hornets surge past Lady Blues in second half 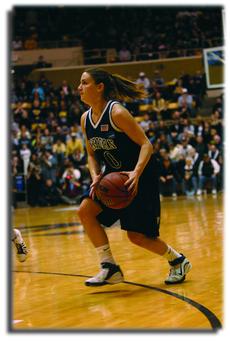 Hornet attack Jessica Aebi, senior guard, prepares for her next move against Emporia State during Saturday's game. The Lady Blues worked their way to a 14-point lead at halftime but were overcome by the Hornets' second-half shooting, falling 74-67 in White Auditorium.

It appeared for the second straight game the Lady Blues were going to run away with the Washburn-Emporia rivalry after taking the lead five minutes into the game and holding a 38-24 lead at halftime. But then, the surge was too much for the Lady Blues to handle, falling to the No. 9 Lady Hornets 74-67 in White Auditorium, Saturday.

“You just know coming in here its going to be a battle between two good teams,” said Cindy Keeley, junior guard. “We knew it and we weren’t surprised by it. It was a battle the whole time. We just didn’t come out on top.”

Keeley hit three treys in a row late in the first half in the midst of a 14-2 run that put the Lady Blues up by 16, their largest lead of the game. But in the second half, the Lady Hornets would make a run of their own.

“They came out running the second half and we had to come out and stop them sooner than we did,” said Keeley. “We just didn’t get the defensive stops we needed.”

Amanda Holmes, Lady Blues junior forward, hit the first bucket of the second half, but things would get progressively worse for the Lady Blues from there. Several free-throw shots and a couple treys later, the Lady Blues found their lead dwindling fast.

“The second half they played pretty well,” said Ron McHenry, head women’s basketball coach. “The first half we played pretty well and got the lead. But there are two halves. They are a good basketball team and this place is tough to play at. The second half they started getting tough shots and when that happened their defense picked up and they just kept getting better.”

McHenry finally called a timeout at the 13:28 mark when he found his team suddenly only up by three. But this would stall the Lady Hornets’ momentum for only a moment. The Lady Hornets took the lead at the 4:58 mark with a layup and follow-up free throw by Lady Hornet Andrea Leiker. The Lady Blues would tie it up on the next possession with a Keeley free throw, but that would be the last time as the Lady Hornets hung on for the win.

“I’m a little frustrated that we had a 16-point lead,” said Megan Sullivan, senior forward. “That’s hard to keep on the road too, but that’s kind of been our problem. We don’t always keep our intensity and we get kind of flustered when they start making a run at us, so I think we need to work on that.”

“You have to learn from your mistakes,” said McHenry. “That’s just a part of life, you can learn from things that you just don’t do well. Try to get better, and if you can do that, it’s not that big of negative. This team will rebound.”

“With a loss now we just need to come out and play as a team and get back on our winning streak for the next two games, especially on senior night,” said Sullivan. “Go with two wins into conference, so we have some momentum and are able to win the conference tournament.”