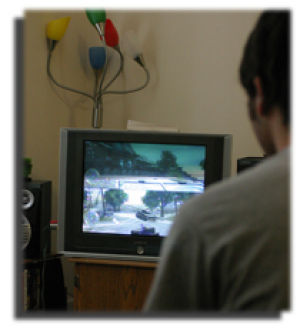 Lounging around a living room shouting random whoops and yells, three students sit engrossed in a WWII multiplayer game of “Call of Duty 3” on Xbox 360.

To some this may seem an unfamiliar sight, but for Colten Henry and many other college students, it’s as natural as throwing a football. Video gaming has been on the rise for the last decade and has penetrated nearly every dorm room in America. Gamers, once stereotyped and secluded, have branched out into almost every personality imaginable. From athletes to academics, gaming has hit mainstream America and is now a daily routine for many college students.

“[Gaming] can take you to another world,” said Henry, a sophomore mass media major.

A fan of first-person shooter and computer strategy games, Henry said he has played video games all his life. Growing up on a farm in rural Kansas, Henry said it was just something to pass the time. On average, he plays about two to three hours per day. There are times when he won’t touch a console for weeks, and others that involve 12-hour gaming marathons.

“It’s a chance to be something different,” said Henry. “When you’re really stressed, it’s something to take your mind off it. You’re worried about fighting some bad guy; you’re not worrying about failing your next test.”

Clayton Calder, sophomore history and secondary education major, agreed he played games to get his mind off things and relax. A member of the Washburn football team, Calder doesn’t fit society’s major stereotype of gamers. Calder said people most often associate gaming with nerds, people who play all day and those who have little or no social skills.

The major games Calder is familiar with include the popular first-person shooter game “Halo 2,” and “World of Warcraft,” an online multiplayer game where players can create, level-up and undertake quests with their character.

“Some people like to build models or read books. It’s just a hobby,” said Calder.

He added that recently he plays one to two hours per day, but last semester he would sometimes play up to three hours.

While the ability to outsmart a computerized opponent has long been an alluring factor of video games, the chance to outwit another human is just as satisfying if not more so, said Henry. As games move towards online play, the community aspect of gaming is coming into focus. Beating a computer is fun, said Henry, but eventually they become predictable. Playing against another human who is completely random adds another level to the game.

While neither Calder nor Henry has ever become completely immersed in a game, they both agreed there is something about video games that is inherently addictive. Henry admitted to skipping class on several different occasions to game when he knew there was nothing of importance going on.

To keep from becoming distracted, Henry has employed several tactics, including setting an alarm for a specific time limit, or simply banking on the fact his console will lock up after extended use. Most of these he put into effect after choosing to play games over studying for several nights.

“That’s a good way to stop,” said Henry. “When you fail a test, you pretty much make sure you don’t do that again.”

Like many things, though, gaming in moderation is the best idea. While society may still have negative connotations about gaming and gamers alike, both Calder and Henry believe it will eventually be accepted. The only major problem Henry has is the blaming of video games for instilling violent emotions in youth.

Describing himself as a fairly frequent gamer, he says he has never once felt the urge to violently attack someone because of it. He added that too often people overlook other factors involved in a violent act and immediately jump to blame the video game industry.

“To me, violence in video games is a scapegoat for society’s larger problems,” said Henry.

To some, video games are a source of relaxation and stress release, while still others will see it as a diversion from more studious goals, one for students in particular is an unnecessary distraction.