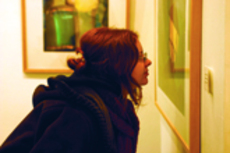 The art crawl every first friday of every month is a sight to behold. Sandra McCann focuses in on one of the many pieces available to look at on the walk. More information about the First Friday Art Walk can be found at any of the galleries mentioned in this article or at www.artsconnecttopeka.org.

Art is something that’s never really been a front-runner in Topeka. The scene could be bigger and people could be more involved, but many of the galleries around town are trying to do something about that.

The First Friday Art Walk started about a year ago. On the first Friday of every month, some galleries are having openings and others are just continuing their current show. Patrons are expected to travel from gallery to gallery and explore the Topeka art scene.

The Collective, the Sabatini Gallary at the Topeka Shawnee County Public Library, Beauchamp’s, The Topeka Art Guild Gallery, Art Gallery & Classroom at Fleming Place and the Southwind Gallery are all regular participants in the event.

“The advertising is done by whoever can afford it that month so it’s not just one person putting everything out there. It’s really a group effort,” said Audrey Leamon of the Collective Gallery.

The event seems to be getting more popular as well.

“Ever since it began, you can see it growing in increments,” said Leamon. “This is really a good event for the locals to be able to experience Topeka artists, since there aren’t that many in Topeka.”

At the latest Art Walk, Marty Mavrovich opened his show at The Collective. His work offered several different mediums like charcoal, acrylic and watercolor. His subjects were varied.

In “Sunlight,” he focused on a small section of large trees with the sun filtering through their large bodies and scant leaves.

Another artist at The Collective, Barbara Waterman-Peters, had a set of two paintings: “MWS2-39” and “MWS2-41.” They were dark a woman and crows. They were reminiscent of a Grimm Fairytale and an uneasiness of another world.

Beauchamp’s, down the street from The Collective, was showing Colleeen Zacharias Gregoire, which opened Jan. 5. Her show will run until Feb. 14.

This exhibit featured strong, vivid colors in the oil paintings with pieces like “Victorian Porch in the Country” and “Afternoon Tea.”

There was also some pottery in the middle of this gallery. “Dysfunction Stein” by John Kudlack showcased a vase – like body on a stand, a jagged top and inverted handle.

For a little bit more variety, the Sabatini Gallery offered a photography collection from Judith Sabatini. It was a combination of color and black and white, but nothing was digital. “Conversation” featured a young boy and a grown man discussing something. The composition was interesting and the lighting worked well.