No. 6 Lady Blues win by 10 over Jennies on senior night 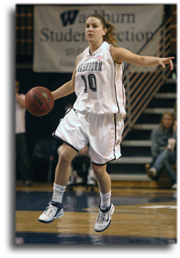 Jessica Aebi, senior guard, directs traffic while on the move Saturday night in the Lady Blues win over Central Missouri.

Brooke Ubelaker and Jessica Aebi, Washburn seniors, took over on senior night as they combined for 36 points to lead the No. 6 Lady Blues basketball team to a 63-53 victory over the Central Missouri Jennies Saturday at Lee Arena. The Lady Blues will face Southwest Baptist University in the first round of the MIAA tournament this Friday in Kansas City, Mo. In their four seasons, the Lady Blue seniors have compiled a record of 117-11.

“We still have areas we need to work on to get better if we want to accomplish things down the road,” said Cindy Keeley, Washburn senior guard. “Playing for Washburn has been great, we’ve accomplished a lot and it’s been a great thing to be a part of, lots of memories, and hopefully we can finish this thing off right so I can have a couple more.”

Washburn started out slow, but took a 23-16 lead after Corky Stiger, junior guard, scored with 4:07 remaining in the first half. Washburn hit 5-of-12 3-point attempts in the first half and led the Jennies 27-21 at halftime.

“I think we’re defending pretty good but [Saturday] was a tough matchup defensively against a pretty good team that really ran through some sets,” said Ron McHenry, head women’s basketball coach. “Our defense gave us a chance, but we need to focus more on rebounding. The second and third time playing a team, they’re going to know your offense a little better, which was the case against Central Missouri.”

Back-to-back layups by Stiger and Ubelaker put the Lady Blues up 40-28 with 13:08 to play in the second half. Megan Schoenfield, Central Missouri guard, hit a jump shot to cut the lead to 57-51, and then Jojuana Jones, Jennies forward, hit a pair of free throws to bring Central Missouri within four with 48 seconds remaining. Washburn closed out the game with a 6-2 run to seal the victory, 63-53.

“The seniors are an unbelievable group, their record speaks for itself,” said McHenry. “They’re just so talented, they play hard and they’re an awfully special group. Brooke is heading to the Hall of Fame, and Cindy is the best defensive player I’ve ever seen. Jessica Aebi has fought through injuries and has come back to contribute to the program, and Holly [Henrichs], Nikki [Holmes] and Megan [Sullivan] are great kids who still have something left to give us.”

Ubelaker scored 20 points on 6-of-12 shooting to go along with four steals. Aebi scored 16 points, and Stiger added nine points and three assists. Washburn’s tough defense forced the Jennies into 26 turnovers on the night. The Lady Blues improved their record to 24-3, 15-3 in the MIAA. Washburn will face Southwest Baptist University at 6 p.m. Friday, March 2, at Municipal Arena in Kansas, Mo.

“Southwest Baptist has [Amber] Wheeler, who can really shoot the ball, when she goes off we call it the ‘Wheeler night,'” said McHenry. “They play more of a perimeter game, we played them last year as well in the first round and they played a match-up zone on defense against us. We have to be ready for a little bit of everything.

Although Southwest Baptist is the No. 7 seed, the Lady Blues are not taking the game lightly.

“They have a week to prepare, and normally when you are a lower seed you usually try something new,” said McHenry. “Lower seeds don’t have a lot to lose, and we’re probably going to catch a group that’s loose and ready to play.”