A jam for justice for slavery awareness 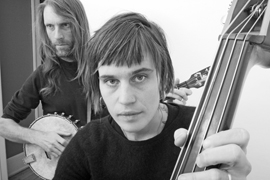 Concert fare The band pictured, Truckstop Honeymoon, will be performing the Jam for Justice March 2. To find more information about this upcoming band, go to www.truckstophoneymoon.com.

I am going to be completely honest here and say that I did not know that human trafficking and slavery is the huge problem that it is. It isn’t just occurring in what we refer to as poor countries, such as Thailand and Nepal, but in the United States and even the state of KS. According to the Polaris Project, human trafficking and modern-day slavery is the third largest and fastest growing criminal industry in the world. This is just a small part of why the Social Justice League is taking this cause and putting it out there.

I talked with Vicky Luttrell, who is spearheading the events that go along with this. Here is a taste of what she had to say:

“This is an issue that needs to be raised. Members of the community can help if they know what to look for.”

The Polaris Project has an amazing Web site where you can get more information which is where I went to learn more. For example, you might think victims are subjected to force and confinement. They are most often controlled through threats, deception, or psychological control and bear the scars of those control mechanisms. Trafficking and slavery occur within the sex industry, forced marriage, in industrial or agricultural work, as well as in domestic servitude as housekeeper or nanny. While it is not uncommon for victims to be trafficked and enslaved within their own country, they are also transported across borders.

Let us take a look at slavery in numbers:

• 27 million – number of people in modern-day slavery across the world:

• 800,000 – number of persons trafficked across international borders each year

• 17,500 – number of foreign nationals trafficked into the United States each year

• 200,000 – number of American children who are at high risk for commercial sexual exploitation

• 50 – percent of all victims are children

• 13 – average age of first being prostituted

These numbers are pretty scary, aren’t they? What were you thinking about when you were 13 years old? I’ll bet you never thought that kids were being prostituted (It’s alright I didn’t think about that either). I hope you keep that in mind when it comes to the children in your life and I hope you choose to help do something. This is happening in the United States, your state and even the city in which you live. So, what do you plan to do to help with this cause?

Jam for Justice is going to be a great time, Vicky Luttrell is especially excited.

“For some students this is going to be their first experience with protest music,” said Luttrell. “I am so excited for them to get to know how important it is. Plus, students will have a great time and learn a little bit.”

Live music and art exhibits were her chosen tools for informing people about this cause.

“Art and music have an impact that allows you to reach people,” said Luttrell.

Now, all you have to do is take this information, get up and get involved.

There are a lot of great options, some of these are local and some are through the Internet. First, the Social Justice League has put together a week’s worth of events open to anyone and they cost very little, if anything at all.

Here is the schedule of events for World Slavery Awareness Week:

• Stand Up Against Slavery art exhibit – 10 a.m. Feb. 27 in the Washburn Room of the Memorial Union.

• Trafficking Humans in the Midwest-Panel Discussion – 7 p.m. March 1 from in Henderson Room 112 at Washburn University.

Speakers for the panel include:

Dan Peterson, associate dean of the School of Applied Studies and faculty in the department of human services at Washburn University. He served on the National Victim Assistance Standards Consortium, and will address the nature of the victims of human trafficking.

Bruce Mactavish, associate dean in the College of Arts and Sciences, assistant professor in the history department at Washburn University, and he will discuss Kansas’ rich history in the abolition movement.

John Paul, assistant professor in the department of sociology and anthropology at Washburn University with a special interest in the sociology of art.

• Freedom Concert – It will take place from 12 – 4 p.m. March 3, at White Concert Hall. Most of the bands playing at this time will also be playing that night at the Celtic Fox.

• Invisible Children will be screening one of their documentaries “The Rough Cut,” from 7-9 p.m. March 5 in Henderson 100.