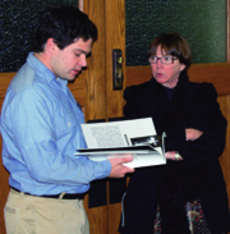 A tall cross in the dark background of a fuzzy photograph held the attention of a sea of pointed, white Klan hoods in the foreground. This was among the powerful photos shown by Alex Cohn during his presentation at the Brown v. Board of Education site in Topeka last week.

In 2004, Alex Cohn, then an intern at the Birmingham News, found a box of negatives in storage at the newspaper. He went through them for 15 months, identifying subjects and discovering the stories behind the photographs. After he completed the investigation, the newspaper published a special section with the photos and the respective stories that accompany them. Cohn sifted through approximately 5,000 pictures, which included Birmingham leaders of the civil rights movement, old pictures of the city and visits from important people. Some of the photos had been published when they were shot, but the public had never seen others.

Cohn made his presentation to several Washburn University classes last week, and discussed the photos and the stories behind them

“He really brought a deeper understanding and recognition to the civil rights movement,” said Dennis Vasquez, superintendent of the Brown v. Board of Education national historic site.

A long series of pictures were of the freedom riders, who were African Americans and white Americans who volunteered to ride interstate buses to test the 1960 Boyton v. Virginia decision, that outlawed segregation on public transportation. This decision along with others that desegregated public facilities, came on the heels of the Brown v. Board decision, which outlawed segregation in schools. The freedom riders were often met with violence.

Cohn showed pictures of famous civil rights activists, along with the violence that accompanied the movement. There were several houses that were bombed, along with the Sixteenth Street Baptist Church, an act that killed four girls.

His presentation included a photo of Thurgood Marshall, who was the lead lawyer for the NAACP at the time and argued in the Brown case. In some of the more graphic images, protestors were being attacked with dogs and fire hoses, which Cohn said were some of the most well-known pictures among the group.

Vasquez said he was excited the park could bring Cohn, and his pictures, so people could hear more in-depth stories about the movement.

“Just his presence in the park and the time he spent with the staff,” said Vazquez, who got to see hundreds of Cohn’s photos. “He really gave us some first-hand information.”

The pictures are being shown at the Brown v. Board site until March 31. The site is open from 9 a.m. to 5 p.m. daily, and is free and open to the public.